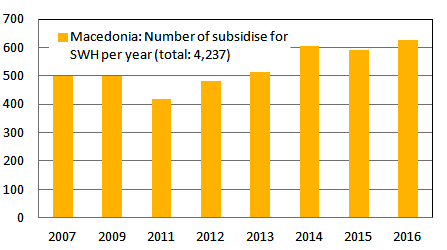 The Republic of Macedonia has been in a state of political turmoil for some time. The most recent general election was held in December 2016, but it is still unclear whether a new government can be formed. Considering the circumstances, the provisional authorities have taken laudable steps to maintain a sense of continuity when it comes to national renewable energy policy. In late January, the Ministry of Economy extended the Programme for partial subsidising of purchased and installed solar thermal collectors in households. “This scheme has been a success since its implementation in 2007 and attracts broad interest,” the country’s economy minister, Driton Kuchi, explained on TV Nova on 7 February. Online news portal Tochka reports that between 2007 and 2016 (see the chart above), the programme supported 4,237 households with a total of Macedonian Denar (MKD) 54 million (around EUR 900,000).
The good news is that the scheme’s 2017 budget has almost tripled. Previously, there were MKD 6 million (EUR 100,000) available to provide financial assistance to Macedonians purchasing solar water heaters. Starting this year, the budget is MKD 16 million (EUR 260,000). Subsidy requirements remain unchanged; every household can be reimbursed for up to 30 % of the system cost, including installation, an amount capped at around around EUR 300. Additionally, buyers of solar thermal systems for heating and cooling benefit from a reduced 5 % VAT instead of the usual 18 % (for more information about the scheme, please see the database of incentive programmes).
“We implemented this measure to promote renewable energy use, improve energy efficiency and protect our environment in accordance with the commitments made by the Republic of Macedonia as a country aspiring to become part of the European Union,” Kuchi said on TV Nova. As an applicant for EU membership and a member of the Vienna-based Energy Community, Macedonia is required to increase the utilisation of renewable energies and raise energy efficiency. The country must also report regularly on its progress by drafting National Renewable Action Plans (NREAP). The Macedonian NREAP 2025 with Vision Until 2030 provides a very advantageous framework for solar thermal use, considering an average yearly solar irradiation of 1,385 kWh/m² (see the attached PDF). The NREAP authors estimate that a household can save 2,400 kWh of heat energy or around MDK 13,000 (EUR 200) in electricity cost over eight months by using a solar water heater.
In light of the – according to Kuchi – successful promotion of solar thermal energy in the residential sector, the question arises whether there could and should be similar support schemes for the industrial use of solar heating and cooling. To promote the installation of solar thermal plants in industrial facilities which consume large amounts of hot water, such as dairies, food processing businesses and textile factories, it will be necessary to support national manufacturers by facilitating export and administrative procedures, the NREAP authors say.
Websites of organisations mentioned in this article:
Macedonian Ministry of Economy: http://www.economy.gov.mk
Energy Community: http://www.energy-community.org
https://solarthermalworld.org/wp-content/uploads/2017/02/macedonia_nreap_november_2015.pdf