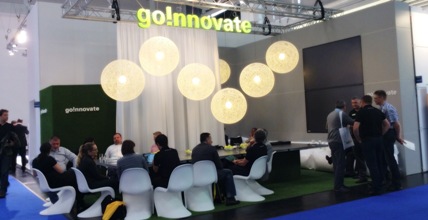 Exceptional cooperation begins in unusual situations. Dr Richard Senti, Chief Financial Officer of the Hoval Group, was part of the jury that evaluated the projects presented at the University of Liechtenstein’s annual business plan competition, and Christian Goritschnig, Managing Director of goinnovate, was at the very same competition to show his ideas for an efficient, optimised solar collector model. This was back in 2010 and it became the starting point of three-and-a-half years of cooperation, which have come to a successful close with the new collector model produced at the headquarters of Hoval in Vaduz, Liechtenstein, and offered by both companies. Hoval markets the new collector under the brand name Ultrasol, whereas goinnovate sells it under the name Radius and purchases the units from Hoval. The photo shows the goinnovate booth at Intersolar 2014 in Munich, Germany in June.
Photo: goinnovate
Supporting young entrepreneurs in turning good business ideas into profitable ventures is exactly the idea behind the business plan competition, which the University of Liechtenstein’s Centre of Excellence for small and medium companies has held each year for the last ten years. The winners receive financial support in the form of prize money, shares or sponsoring. In 2010, Goritschnig was awarded a special Ecopreneurship prize for his ideas on a new collector production and was put in touch with the Hoval Group, a heating and air conditioning specialist which has been offering solar thermal systems since 1975.
Hoval produces the entire Ultrasol/Radius collector in its factory in Vaduz, from drilling the holes for hydraulic connections into the aluminium frame to laser-welding the absorber and gluing the front glass cover, as a seven-minute film on its website shows. Hoval only purchases the one-piece aluminium frame and the glass cover from suppliers. “We signed a sales agreement that allows goinnovate to offer and sell the collector in all countries where Hoval is not present with a subsidiary or a sales office,” Goritschnig said at his Intersolar 2014 booth. “Our product is addressed in particular to architects, building services engineers, companies specialised in prefabricated housing, as well as roofers and plumbers.”
Additional Solar Keymark table allows performance comparisons
The special feature of the collector is its die-cast aluminium frame. According to Goritschnig, this one-piece frame guarantees high stability and stable performance throughout the collector’s lifetime. The R&D team has also reduced the collector’s thickness to only 5.4 cm, which is a lot thinner than the 8 to 9 centimetres of common flat plate collectors but increases thermal losses. According to the additional table for Solar Keymark certificates, the solar yield of the Hoval collector is much lower than the one of comparable flat plate collectors (see the table below).
Performance of different flat plat collectors based on the additional table to the Solar Keymark certificate. The table has been added to all certificates since the beginning of 2012 and includes the annual collector unit output at different solar radiation sites across Europe.
“With our collector, we aimed to enter into a new era that allows aesthetic in-roof solutions while keeping the efficiency factor as high as possible,” Goritschnig explains. The company did not glue the pipe register to the absorber plate, a process which goinnovate presented at international technology conference SMEThermal in 2012. The new collector received two Solar Keymark versions in November 2013, one including an anti-reflective coating on the glass and one for the collector without the coating.
More information:
http://www.hoval.com
http://www.go-innovate.com