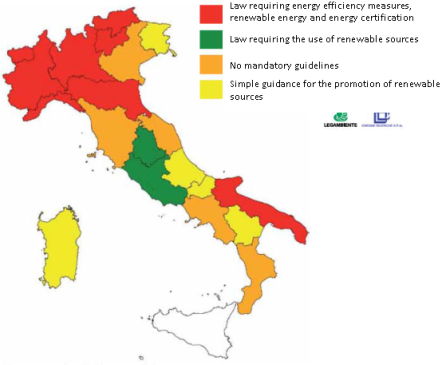 In Italy, a recent national decree no. 164/2014, the so-called Sblocca Italia, aiming at simplifying bureaucratic processes, introduced the concept of a standard building code, which should be developed by the government in cooperation with the regions and municipalities. Of course, in such a standard code, the provisions on energy efficiency and renewables will play a relevant role, which will once again ignite the debate on this hot issue. Hence, Legambiente, one of the major environmental associations in Italy, titled its annual study about the status quo of the implementation of the national renewable building code Simplification and Innovation in Construction: Towards the Building Regulations Act. According to this study, which was presented in February this year, 903 Italian municipalities introduced a mandatory regulation to cover a share of sanitary hot water demand, usually 50 %, with solar thermal technology (see the attached document). The map shows the regions with these kinds of mandatory regulations in place (red and green), as well as the regions without renewable building obligations (orange and yellow). Sicily introduced no specific building regulation.
Source: Legambiente
According to national Law Number 28/2011, all new buildings and also the ones under relevant renovation have been required to cover at least 50 % of sanitary hot water demand with renewable energies since 1 June 2012. And an additional regulation in law 28/2011 stipulates renewable coverage of at least 20 % of the demand for hot water, space heating and cooling.
This threshold increased to 35 % in 2014 and will go up to 50 % from 2017 on. Regarding public buildings, minimum requirements at national level are 10 % higher.
The regions can still implement more restrictive rules: Emilia-Romagna in central Italy, for instance, anticipated the higher requirement of 35 % renewable share in the total heating and cooling demand in 2012, increasing it to 50 % this year.
Local commitment is crucial
Despite the effectiveness of the national law, the role of municipalities is still crucial because they have to develop application rules and they are allowed to set slightly different standards. When it comes to monitoring policy activities at municipal level, the above-mentioned annual survey by Legambiente is a helpful tool.
The 2015 survey reports that 15 % of the Italian municipalities have introduced some sustainable parameters and indicators in their local building codes covering almost 40 % of the population. This means that the number of municipalities with renewable building code policy in place has increased tremendously from 188 in 2008 to 1,182 this year. Unfortunately, geographical distribution is not even, because about 75 % of these municipalities are part of only five regions in the north.
When taking a look at the more specific issue of solar thermal, one can see that 903 municipalities introduced an obligation to cover a share of sanitary hot water demand (usually 50 %) for new buildings and renovations with a solar water heating system. Together with photovoltaics and thermal insulation, this is one of the most commonly required measures of local building codes, maybe thanks to the popularity of the Ordenanza Solar in Barcelona.
It is worth noting that some local authorities went well beyond what has been requested by the central government. For example, in the municipality of Rivoli in the Province of Turin, it is mandatory to cover 60 % of the hot water needs by solar thermal and there is also an incentive for reaching 70 % of demand or if the building covers 20 % of the cooling needs by solar. The municipality of Grosseto in Tuscany introduced a 50 % solar obligation and provides an incentive for the ones who are able to achieve 80 %.
Is simplification possible?
In addition, Legambiente developed some proposals to simplify and harmonise the standard building code for all Italian municipalities. One of the most interesting sections is the one on bureaucratic rules and associated costs. Regarding solar thermal, the highest bureaucratic costs proposed in the PDF presentation are very low with only EUR 50, even in case a visual impact screening is needed, because the document proposes a simplified and standardised procedure for such a screening. An even stronger proposal reported in the document is that solar thermal plants up to 25 m2 should not undergo any visual impact assessment, not even a simplified one.
Finally, one should mention another best practice example from the Emilia-Romagna region: Since January 2015, the harmonisation and standardisation of local building codes has become reality and all 340 municipalities in the region now share the same code, of course, including all the regulations for using renewables and solar thermal in particular.
More information:
http://www.legambiente.it
https://solarthermalworld.org/wp-content/uploads/2015/08/legambiente_renewable_building_code_study_2015.pdf

Law Number 28/2011Sblocca ItaliaSimplification and Innovation in Construction: Towards the Building Regulations Act