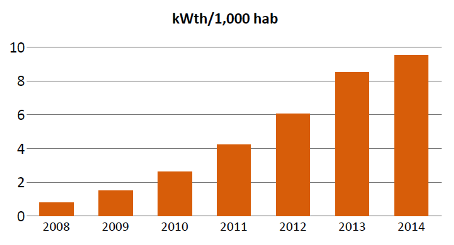 Uruguay, whose population of 3.4 million makes it one of the smallest countries in Latin America, has shown positive market development since 2007. Cumulated installed solar thermal power saw a notable increase from 1 to 9.5 kWth per 1,000 inhabitants. According to numbers published by the National Energy Department and the annual national energy report, the country’s total collector area installed by the end of 2014 amounted to 46,241 m². Mesa Solar, the multi-sector network for the promotion of solar energy in Uruguay calls for accelerated growth to achieve 1 million m² in 2020. The official target of the government is 150,000 m² until 2024.
Source: Construcción y operación de Bancos ensayo de Solar Térmica en Uruguay, presentation held in San José, Costa Rica, on 29 June 2015

Mesa Solar closely collaborates with the Solar Chamber of Uruguay, which was founded in 2010 and entails 28 companies from the solar thermal supply chain, be it manufacturers, importers, system integrators or installers. The continuous lobbying efforts of both networks have led to the government’s implementation of a number of important steps towards a sustainable and quality-oriented market:
Hence, the official government target of 150,000 m² by 2024 has been rather disappointing for the companies in the National Chamber of Solar Energy. The objective was part of the energy efficiency plan which passed the Uruguayan Council of Ministers on 6 August 2015 and was published by the Ministry of Industry, Energy and Mining on 10 August 2015. Uruguay’s economic growth has led to a rise in the consumption of energy and, especially, electricity. In order to guarantee that market growth will be sustainable, the government has decided to limit electricity consumption by promoting energy efficiency. Solar heating and cooling is only one pillar of this plan covering 2015 to 2024 – it also includes green building standards and energy efficiency standards for energy consumption in households, industries and the commercial sector. The plan is to install half of the 150,000 m² of collector area by 2024 in the residential sector and another 30 % in the commercial and service sector.
More information:
National Energy Department: http://www.dne.gub.uy
Plan Solar: http://www.energiasolar.gub.uy
Mesa Solar: mesasolar.org.uy
Solar Chamber of Uruguay: http://www.camarasolardeluruguay.com.uy/
This news was written by Vanessa Kriele, a German freelance journalist specialised in renewable energies and world economics.