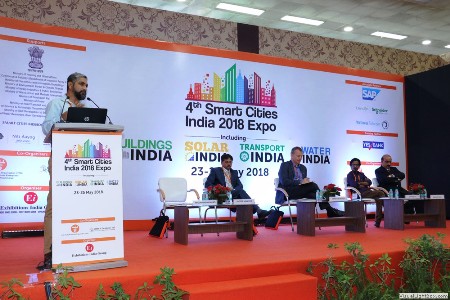 India’s opportunities and challenges around solar process heat for industry, or SHIP, were the central topic of a session at the 3rd Solar India Expo in May. First, representatives for both currently running support schemes, Solar Payback and a renewable energy project managed by the United Nations Industrial Development Organization, or UNIDO, spoke about SHIP market development and projects. Then, three Indian-based SHIP system suppliers presented successful demonstration systems to the around 50 attendees of the event, held in India’s capital New Delhi.

As part of Solar Payback, a 3-year project to encourage the use of SHIP, the Solar Thermal Federation of India, also known as STFI, has identified the most promising industries for this type of application, namely metal processing, dairy, food, textiles, pharmaceuticals, brewing and tobacco. Project Manager and STFI Secretary General Jaideep Malaviya listed the key requirements for successfully developing India’s SHIP market:
India is home to 271 SHIP systems totalling 52 MWth, according to UNIDO Representative René Van Berkel. UNIDO has drafted a roadmap to identify the potential for SHIP in India, as illustrated below. From a technical and economic standpoint, 2 % of the 1,267 TWh of fuel consumed in the industrial sector in financial year 2013-2014 could be replaced by SHIP systems. This corresponds to 6.45 GWth, or 124 times the 52 MWth of SHIP capacity in operation today.

SHIP market potential in India (see presentation attached)
Source: UNIDO
Van Berkel also explained what incentives are part of the financial support package that the Indian Renewable Energy Development Agency started offering in December 2016. He said that beneficiaries had to contribute 25 % of their own money to the total to receive a 30 % subsidy from the Ministry of New and Renewable Energy and a loan from UNIDO to cover the remaining 45 % of benchmark system costs, at 5 % lower-than-usual interest rates.
M.A. Aravindh, a scientist working at the ministry, explained the importance of reducing fossil fuel use in industry. Energy demand in the manufacturing sector had accounted for 42 % of crude oil imports in financial year 2014-2015, with around 30 million of the import total of 189.43 million tonnes being used to provide thermal energy below 250 °C.
The SHIP case study which drew the most attention was the 110 m² solar field at Tata Motors in Jamshedpur, in the northeast state of Jharkhand. It consists of compound parabolic concentrator, or CPC, vacuum tube collectors, used to heat water to 80 °C to clean metal components. The solar system has been added to the existing 45 kW electric heater to function as a preheating system.
The distinguishing feature of the field is its second cover, a flat glass panel. Madhusudhan Rao Rapole, Managing Director of project developer Oorja Energy, explained: “We found cleaning the reflectors behind the vacuum tubes to be a challenging task. Cleaning is easier if the collectors are covered by flat glass.”
Organisations mentioned in this article:
http://www.solarindiaexpo.com/
http://www.oorja.in/
http://www.mnre.gov.in/
http://www.solar-payback.com
http://www.cshindia.in/
https://solarthermalworld.org/wp-content/uploads/2018/06/unido_van_berkel_24may2018_india.pdf