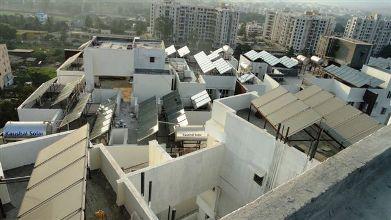 Until now, the Indian solar thermal market has been dominated by flat plate collectors (FPCs). FPCs have several advantages, with the main being robust and long-lasting. In a price-sensitive market such as the Indian one, however, vacuum tube collectors (VTCs) have gained a foothold over the last years because the systems are 30% to 40% cheaper if the glass tubes are imported from China. Although there is no official data available, VTCs are said to have reached a 35% share in the Indian market. In the fiscal year 2011/2012, market volume reached a newly installed collector area of 1 million m² (see interview with Tarun Kapoor). The photo shows flat plate collectors on high-rise, residential buildings in western India.
Photo: Kaushal Solar

Still, there are a couple of manufacturers which have not followed this new trend in India: Emmvee Solar in Bengaluru and Kaushal Solar in Pune. Emmvee Solar is one of the largest manufacturers in the country, with around 85,000 m² of FPC area produced last year. The company bought a laser-welding machine from Austrian machinery supplier DTEC this summer.

According to Emmvee Managing Director Donti Venkatarathanaiah Manjunatha, reliability is the major issue with VTCs. They require frequent maintenance, which runs counter to the 5-year warranty required by the Federal Renewable Energy Ministry MNRE. Usually, a collector must be in operation for at least 15 years, which is a challenge for VTC technology, as Manjunatha sees it. The Managing Director points out that installing VTCs is a challenge itself. A slight misalignment of the tube during installation can lead to water dripping down onto the ground. Hard water can cause the tanks to leak, too. He says, “The water quality in the majority of B-class towns is hard. Given the condition of the water and the temperatures of above 85 °C, the Neoprene gaskets will tend to lose their properties and become brittle.”

When it comes to VCTs, the Managing Director of Kaushal Solar, Chandramohan Kaushal, agrees with his competitor. Kaushal is located in Pune, western India, and has also been in business for more than two decades. The company stays away from VTCs because of the large manpower required for maintenance, which would reduce profits. According to Kaushal, the risk of broken tubes is one reason why the systems are unsuitable for difficult environmental conditions. Other major hurdles are the storage tank incorporated into VTC systems, which cannot be used as a pressurised system, and the tank itself, which suffers from frequent leakages. This, in turn, could also reduce the consumer´s confidence in solar thermal technology in the long run.