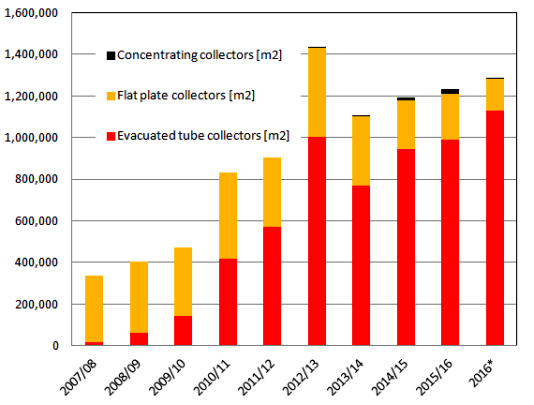 The Indian solar thermal market is gradually becoming self-sustaining, as fiscal year 2016 showed renewed signs of growth after the suspension of the national grant scheme in 2014. Overall, the glazed collector market grew by 6 % to 1.28 million m² (894 MWth). Another 6,250 m² were installed for use in concentrating collector systems. This figure was not added to the glazed total, but is shown in the chart. The market numbers for 2016 were provided by Indian consultant Jaideep Malaviya, who based his analysis on the import statistics of vacuum tubes and a survey among the few flat plate collector manufacturers still in business in the country today.
(*) The bar for 2016 refers to numbers from the calendar year 2016, as the country’s Central Board of Excise and Customs has not yet published data for January–March 2017. All other bars in the graph refer to figures from the respective fiscal year, which in India runs between 1 April and 31 March the following year.
Source: Jaideep Malaviya
The import statistics by Legumex Impex (www.zauba.com) show that India imported 4,296,571 vacuum tubes for low-temperature applications under five HS codes (84191920, 84199010, 84191110, 84199090 and 84191910) between January and December 2016. A new standard called All Glass Evacuated Tubes Solar Water Heating System has the average tube size at 0.244 m² for the most common type of tube imported to India (58 * 1800 mm²). Consequently, the total tube absorber area imported to the country was around 1.05 million m².
In the previous fiscal year of 2015, the Legumex statistics registered imports of 425,000 tubes or an average absorber area of 1.03 million m² when multiplied with the standard factor.
The share of imported vacuum tubes in the newly installed collector area in 2016 grew to 88 % (up from 82 % in 2015). The newly installed flat plate collector area added up to 0.15 million m² (down from 0.22 million m² in 2015).
The concentrating collector area installed each year peaked in 2015/2016 at 21,500 m² (black bar in the chart) due to a federal programme with which the Ministry of New and Renewable Energy (MNRE) covered 30 % of system costs. In 2016, however, there were only 6,250 m² of new concentrating collectors, which has made room in the market vacuum tube systems with aluminium mirrors (called compound parabolic concentrators = CPC), which are increasingly used in industrial processes.
Last year was the first time that Legumex showed this technology as a separate category. In 2016 India imported 403,909 vacuum tubes with CPC under three HS codes 84191910, 8419910, 84199090 with a typical size of 1,800 * 58 mm². Using the average CPC tube area factor of 0.19 m²/tube set by MNRE, this results in 76,743 m² which is included in the chart above as vacuum tube collector area. In vacuum tube collectors with CPC mirrors the space between the tubes is smaller than in panels without aluminium mirrors, this is why the area per tube is smaller in this tube category. Use of vacuum tubes with CPCs to provide hot water of up to 90 °C has been on the rise in commercial application and several industries, such as automotive, chemical, dairy, food processing and pharmaceutical.
India’s national industry association, Solar Thermal Federation of India (STFI), continues to try and direct the government’s attention to the alarming rise in imports of solar thermal components and systems with no checks on quality. Unless the government intervenes by establishing stringent and mandatory standards, India may soon become a haven for sub-standard vacuum tubes, which will lead to a decline in customer confidence, STFI emphasised.