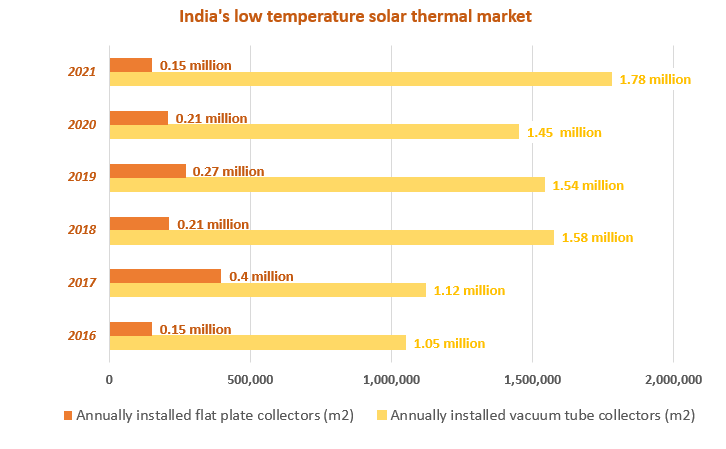 The Indian solar thermal industry recovered last year after being hit severely by the pandemic in 2020. A survey carried out by Malaviya Solar Energy Consultancy, India, indicates 16 % growth in glazed collector area. Solar thermal system providers sold an estimated 1.35 GW (1.93 million m2) in 2021 compared to 1.16 GW (1.66 million m2) the previous year. A factor of uncertainty is the quantity of vacuum tubes in stock at the beginning and end of 2021. Owing to the pandemic situation, several manufacturers stocked the imported vacuum tubes in higher quantities than usual. Vacuum tube collectors dominated sales with 92 % market share. Sales of flat-plate collectors declined by 25 %, partly due to rising material costs.

“Despite challenging times, India’s solar thermal market has continued to maintain its momentum”, said consultant Jaideep Malaviya. “Incentives from the government for the real estate industry improved the mood of investors and the rising cost of electricity made solar water heaters a long-term sustainable option.” Among the supporting policies were rules for mandatory solar thermal installations, needed in order to obtain building completion certification and property tax rebates from local municipalities.

However, most of the solar thermal manufacturers and project developers agree that the growing attractiveness of rooftop solar PV will harm further growth in the collector market. The net-metering scheme, which allows PV system owners to feed surplus electricity into the grid during the day and then use it at night from the grid, enables end users to reduce their electricity bills. This is making roofs more attractive for solar PV systems.

The flat-plate collector market continued its decline with only 10.5 MW (0.15 million m2) of installed collector area. Most of the capacity came from three India-based fin tube manufacturers, namely Bhagyanagar, Emmvee Solar Systems and Greentek. The latter reported increased sales of systems for health care centres and hospitals that were equipped with flat-plate collectors under the government initiative to procure India-made products. Currently there are no Indian vacuum tube manufacturers. All the coated tubes are imported from China. 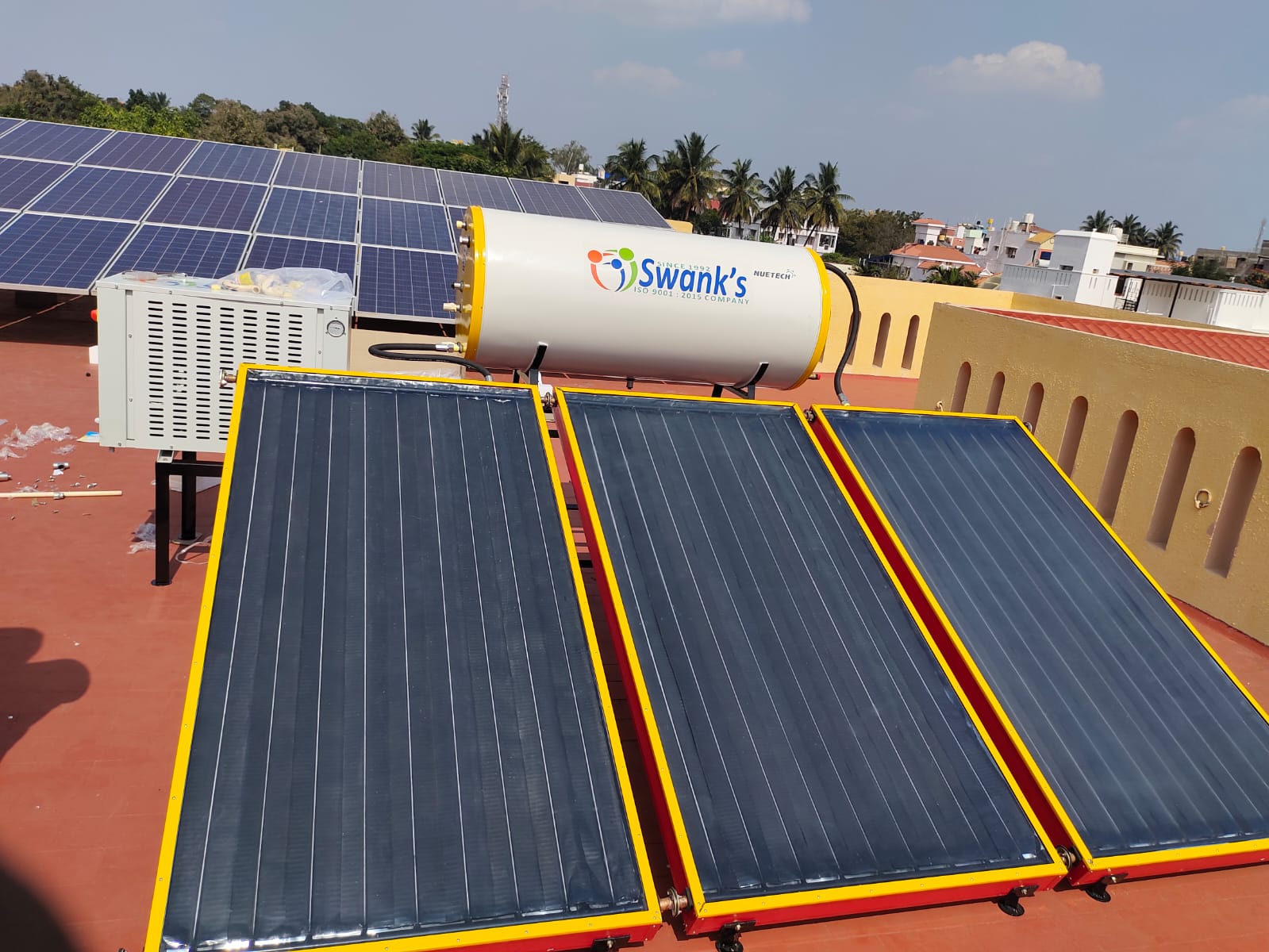 Thermosiphon systems for single-family houses are still the dominating application in India. According to solar thermal system suppliers, around 5 % of the newly installed collector area in 2021 supplies hot water to multi-family houses or other types of building. Photo: Nuetech Solar

Solar Mission target will be achieved next year

According to Malaviya Solar Energy Consultancy, 18.2 million m2 of collector area were in operation in India at the end of 2021, of which 80 % were vacuum tubes. The cumulated capacity is already fairly close to the target of 20 million m2 by 2022 set by the Solar India Mission.

The Jawaharlal Nehru National Solar Mission, launched in November 2009, included three phases for solar thermal deployment. The third phase from 2017 to 2022 ends next year and requires 20 million m2 of collector area to be in operation. If the industry can keep up the pace, that goal will be achieved.

The market data is based on a survey of the leading solar vacuum tube collector suppliers and the major flat-plate and absorber fin manufacturers. The following table shows the break-up in terms of number of vacuum tubes sold in the calendar year 2020 according to the size of the tubes. An authorised market research agency that maintains the data on imports of goods in India validated the figures according to import statistics under the four HS codes (84191920, 84199010, 84199090 and 84191910.