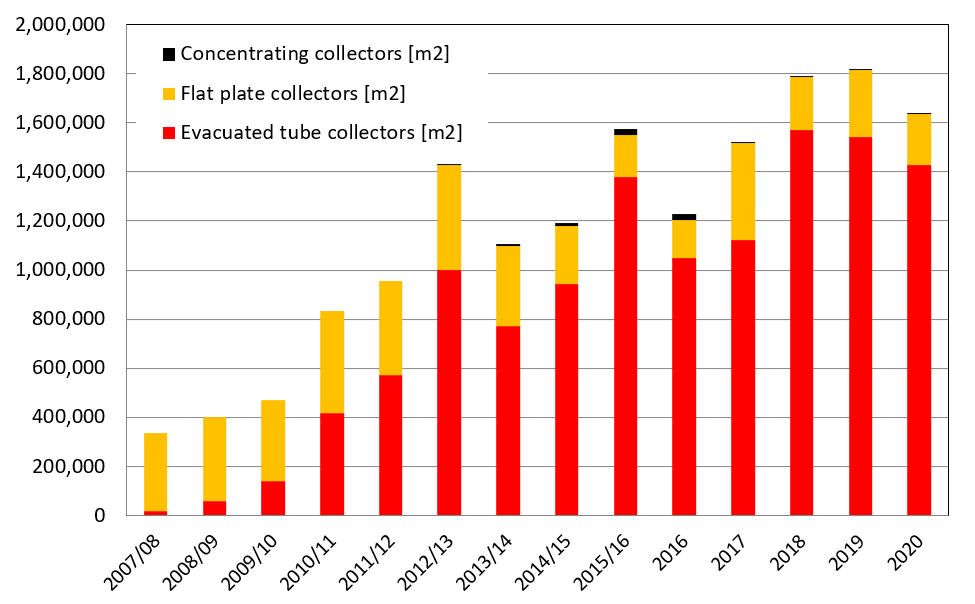 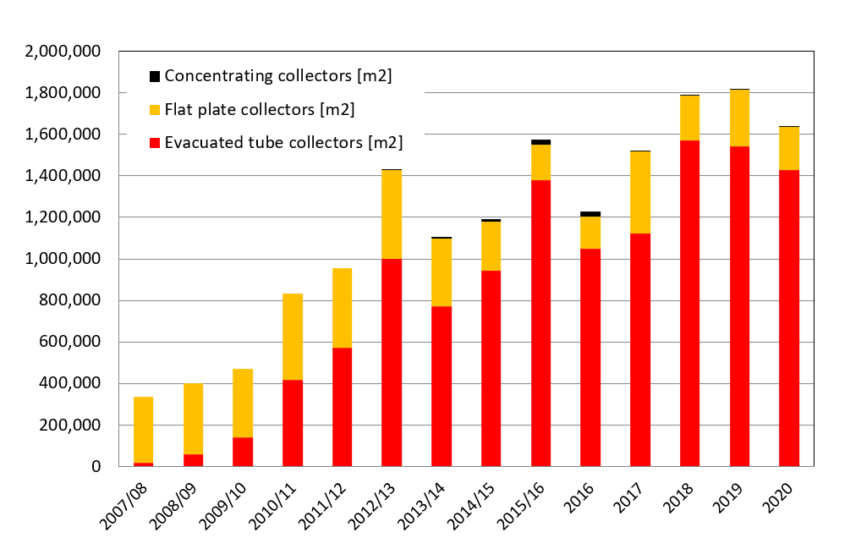 In 2020, hopes for growth in India’s solar thermal market were dashed when Covid-19 spread like wildfire around the globe, causing a 10 % drop in annual capacity additions. A survey conducted by Malaviya Solar Energy Consultancy indicates 1.15 GWth (1.64 million m2) of glazed collector area was installed in India in 2020, compared to 1.27 GWth (1.81 million m2) in the prior year. Vacuum tube collectors again dominated sales, making up 87 % of new systems. The market for flat plate collectors, on the other hand, declined sharply, with sales falling by 24 % because of rather weak demand. And after the end of the national support scheme for concentrating solar heat projects, parabolic trough and concentrating dish collector capacity went down as well, coming to 1,482 m2 only (2,500 m2 in 2019). The analysis of the market development in India 2020 was supported by the project Solar Payback.
Source: Malaviya Solar Energy Consultancy
Overall, India’s solar thermal manufacturers reported opposing trends in 2020, Malaviya said. They did feel negative impacts from the government restrictions placed on production and sales, a result of the country’s full lockdown in April and May and another partial one over several months. But they also noted that precautionary health measures, such as frequent hot baths, increased demand for solar water heaters.
The market data originates with a survey among India’s leading suppliers of solar vacuum tube collectors and major manufacturers of flat plate collectors and absorber fins. The following table breaks down vacuum tube sales in calendar year 2020 by tube size. The surveyed manufacturers confirmed that they imported more tubes than they were able to sell, so they had about 15 % still in stock at the end of 2020. An authorised market research agency which maintains data on goods imports to India validated their figures using import statistics under the four HS codes 84191920, 84199010, 84199090 and 84191910.
Chinese vacuum tubes sold in India in calendar year 2020. In 2019, 5.856 million of these tubes were sold across India, adding up to 1,548,581 m2 (see this news article).
Source: Malaviya Solar Energy Consultancy
Last year, the newly installed flat plate collector capacity dropped by 24 %, from 191 MWth (272,156 m2) in 2019 to 145 MWth (207,279 m2) in 2020. Most of that capacity came from three fin tube manufacturers, namely Bhagyanagar, Emmvee Solar Systems and Greentek.
Bright prospects for commercial cooking
In India, concentrating solar thermal collectors typically provide heat for either commercial cooking or industrial applications. Last year, commercial steam cooking for temples and community meal services continued to hold much appeal, as demonstrated by 11 new installations. This sector could see even more growth in the near future due to rising fuel oil prices.
By contrast, industrial solar heat systems are a lot more difficult to sell, since the national support programme supporting those ended in March 2020, following a two-year extension approved by the Indian Ministry of New and Renewable Energy in February 2018 (see this earlier news report). As for industrial solar heat projects using concentrating collectors, only a handful were commissioned in 2020 by Quadsun Solar Solutions and Sunrise CSP, both based in India, and Vicot, based in China. Market players expect SHIP to remain a niche market unless the support programme is revived, considering it provided grants worth 30 % of the investment costs. And as stand-alone hot water units, heat pumps are rapidly gobbling up industrial market shares, which has prompted solar collector manufacturers to set up parallel business units providing these types of solutions.

Solar field installed by Inter Solar Systems at the top of a New Delhi hospital
Photo: Jaideep Malaviya
Karnataka state, India’s leader in solar water heating
Last year, Karnataka state again took the lion’s share of capacity additions, at close to 65 % (50 % in 2019). The driving force in the state is a strict mandatory policy, overseen by local electric utilities since 2007. The first mover in this market was municipal utility BESCOM in Bengaluru, Karnataka’s capital. In 2009, BESCOM began denying access to the electric grid to households not equipped with a solar water heater. Until 2017, strict enforcement resulted in 1.234 million m2 of collector area being installed across the city. BESCOM’s policy was soon copied by Karnataka’s other four electric utilities, turning the state into India’s leader in solar water heater capacity additions, a title it has kept to this day.
Websites of organisations mentionedin this article
https://www.solar-payback.com/
http://quadsunsolar.com/
https://sunrisecsp.in/
http://www.bhagyanagarindia.com/
http://www.vicot.com.cn/
https://emmvee.com/
http://www.greentekindia.co.in/