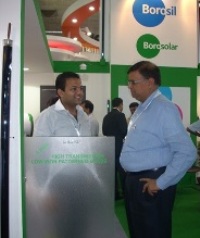 Gujarat Borosil Limited (GBL), a division of Borosil Glass Works Limited, has started producing low iron glass plate for flat plate collectors in its factory at Bharuch in Gujarat, a state in Western India. The company announced to be the first one of its kind to produce such a product in India.

The glass is produced by means of rollers, pressing a light textured pattern into the hot raw glass. “The surface provides a good light diffusion and reduces reflection”, explains Pradeep Kheruka. Testing authorities confirmed a solar transmission of 91.6 % at a glass thickness of 3.2 mm. According to the information provided by the company, the glass has a linearly ribbed pattern on one side, which causes light to be directed primarily along one axis.

GBL’s production capacity is 13,000 m2 per day. Its factory is equipped with a flexible production line, which can handle a thickness range from 2 to 10 mm. The glass will be cut, polished and tempered automatically after production. Tempering is done in accordance to all internationally accepted standards, including European tempering standard EN 12150 for photovoltaic module applications, flat plate collectors and green houses.

The Indian company is already looking ahead and considers exporting to the European Union, USA, Australia, Middle East and South Asia.