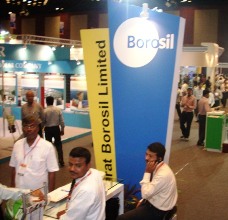 Gujarat Borosil is the only solar glass manufacturing company in India with a furnace to manufacture end-to-end low iron patterned solar glass. In 2008, the company was to launch the first vacuum tube collector with glass tubes from its own production, to be sold under the brand name Borosolar (see news: http://www.solarthermalworld.org/node/276).  However, after being questioned about the issue, Borosil has now confirmed that it has never really started the serial production of its glass tubes for vacuum tube collectors. The company rather imported some tubes and sold collectors under its brand.
Photo: Jaideep Malaviya

Vacuum tube collectors are gaining popularity in India due to the cost advantages they have over flat plate collectors on the subcontinent. Being able to produce these vacuum tubes locally would certainly be a successful enterprise – if it were not for the neighbouring Chinese supplying their tubes to Indian manufacturers. After analysing the situation, Borosil realised there was no way to compete with the prices of imported Chinese tubes. Instead, the company continued to focus on delivering cover glass plates to the flat plate collector and photovoltaic industry.

Borosil claims that the Indian solar water heating market was an extremely price sensitive market, a fact that had dampened their business expectations. “Another reason for dropping our plans was the lack of export incentives by the Indian government,” Shreevar Kheruka, Vice President of the Borosil Group, explains. Globally, Indian manufacturers face strong competition, too, after the Chinese manufacturers have begun to consolidate their position. According to Kheruka, the high cost of energy represents an additional barrier to competitive manufacturing.

Still, sources at Borosil say that if the business volume for vacuum tubes in India increases significantly, the company may revive its local manufacturing strategy and get into competition with imported tubes.