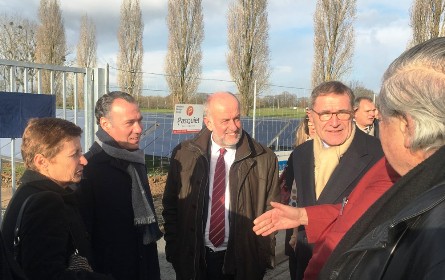 15 December saw the inauguration of the first installation supported by the subsidy scheme for large-scale solar thermal projects in France. The 2,340 m² collector field by German manufacturer KBB Kollektorbau has since been feeding into a biomass district heating network of Châteaubriant, a town in western France. Altogether, the subsidy scheme’s administrator, French energy agency Ademe, approved six solar thermal projects during the first tender invitation called Appel à Projets National Grandes Installations Solaires Thermiques. The second one in November 2017 led to the submission and approval of a 14,000 m² solar process heat project, which is currently in planning. The programme inviting large-scale solar thermal tenders started in 2015 (see the database of incentive programmes for more information). There are two new submission deadlines planned for March and November 2018.

Photo: Ademe
The primary objective of the Châteaubriant project has been to reduce the heat price for consumers by 2.5 % after taking into account a carbon tax increase planned by the French government. The municipality of Châteaubriant was the sole provider of funds for the EUR 1.25 million (530 EUR/m²) endeavour, having received a EUR 875,000 subsidy from Ademe. Adme’s grant covered 65 % of the project costs and another 5 % were added from the so called AFR fund to boost economy in designated regions in France.
The French energy agency emphasised that the large subsidy amount would allow each stakeholder to accumulate experience and lower the risks involved. The investor in the project did not choose a turnkey contractor, but asked French engineering companies Girus and Tecsol to supervise the project as independent businesses. Several contractors were chosen to work on different aspects of the project, such as the solar field, the support structure, civil engineering and hydraulics. The solar district heating plant was included as an independent unit in the existing district heating contract hold by French utility Engie Cofely, the operator of the biomass plant. The contract for the solar heat delivery was revised by the Austrian company S.O.L.I.D..
The solar system is planned to deliver 900 MWh/year to the heat network (385 kWh/m²). This equals 5 % of the annual demand and 70 % of the one in summer. An important difference to other projects is that an agreement signed by Eklor, which represents collector field supplier KBB in France, Cofely, which operates the plant, and Tecsol, which oversaw completion of the project, guarantees the delivery of a certain amount of solar heat. Another innovative approach is the payment of an incentive if heat customers connected to the district heating network reduce their return temperatures.
Six large-scale solar installations get the nod
Since the launch of the subsidy scheme in 2015, ADEME has received a total of 14 applications and approved six of them. In addition to the district heating project in Châteaubriant, a solar plant in Merville heats water for cleaning LYS Services trucks transporting food. This project, likewise managed by Tecsol, saw 1,172 m² of Opticube collector area delivered by Belgian-based Sunoptimo.
The largest project to date was approved in July 2016: a 4,000 m² solar plant to supply heat to a paper mill in the Dordogne region, together with a third-party investor, French-based Newheat.
The three biggest plants to have received a large-scale system subsidy or an approval from Ademe. ESCO is short for Energy Service Company.
Source: Ademe
Film in French about the Chateaubriant project :
https://www.dropbox.com/s/kk9l4qgpe0vqfuh/Chateaubriant%20FILM%202%20v6-HD.mp4?dl=0
Organisations mentioned in this article:
http://www.ademe.fr
http://www.kbb-solar.com/en/
http://www.tecsol.fr/
http://www.newheat.fr
http://www.sunoptimo.com/
http://www.ramboll.de/
http://www.elkor.net/
https://www.engie-cofely.fr/
http://girus.fr/en/#/intro
http://savosolar.com/
Large-scale subsidy scheme: http://www.ademe.fr/appel-a-projets-national-grandes-installations-solaires-thermiques