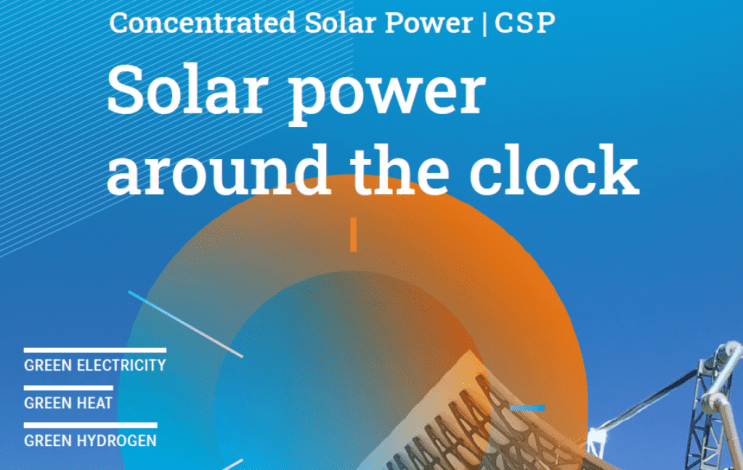 Concentrating collectors that provide heat or steam for large energy consumers are still far and few between. In 2020, 35 projects with a total aperture area of 16,300 m2 (11 MWth) were put up around the globe, with the most capacity added in China and Turkey, However, according to the latest policy paper published by the German Association for Concentrated Solar Power – DCSP, concentrating collectors could also be instrumental in decarbonising the heating market in Germany, as well as all other parts of central Europe. The 36-page document is available for download in English, French and German here.
Titled CSP – Solar Power around the clock, the paper highlights the key role of German companies and research institutes in developing CSP technology and making it marketable. Besides obligatory chapters on CSP power generation and the role of energy storage, the document also has a chapter on green heat, in which its authors write that “CSP provides sufficiently high temperatures for the process steam that industry so urgently needs, including for the production of green hydrogen”.
Another chapter called The price of solar thermal energy … and its true value shows calculations by the German Aerospace Centre – DLR, illustrating that “CSP collectors can already achieve heat production costs comparable to those of stationary collectors” if they are run at 80 °C or above and are part of solar fields measuring a few thousand square metres. 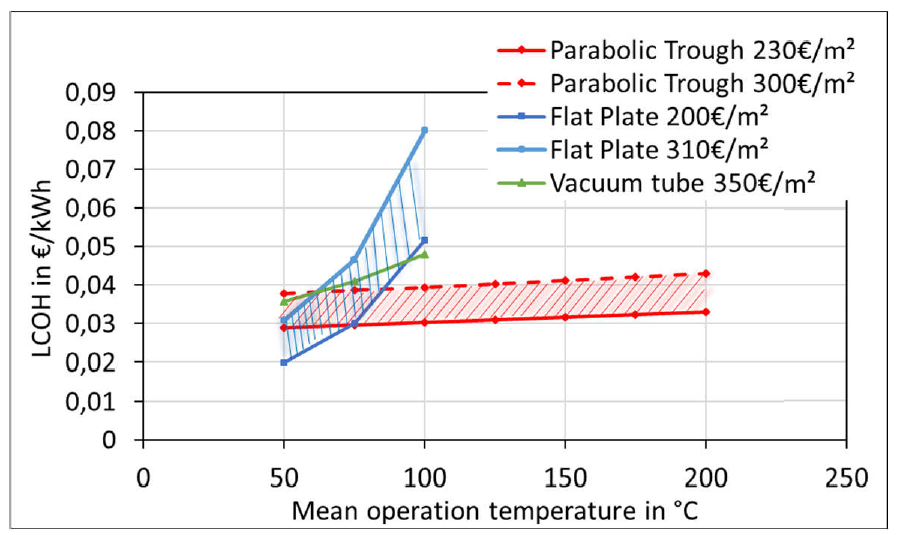 Levelised cost of heat (LCOH) of different collector fields run at the typical German town of Potsdam. The discount rate is set at 3 % and the lifetime of the system at 25 years. Source: DLR
The authors additionally confirm that municipal utilities in Germany have shown a growing interest in concentrating collector fields, as these fields can reliably provide high temperatures and defocus the collectors in summer to prevent overheating. “We’ve been in negotiations with utilities and industrial businesses in Germany to put up solar fields of more than 10,000 m2, in an effort to identify suitable areas and carry out prefeasibility studies,” said Dr Joachim Krüger, CEO of project developer Solarlite and chairman of the board of DCSP.
Solarlite is pleased with the performance of the first two industrial solar heat plants the company has installed in Belgium, where remote monitoring and control equipment allows for the detailed tracking of steam supplies. “The measured performance has always met or exceeded our expectations. And as the rain regularly washes away the dirt building up on the mirrors, we’ve had to clean them much less frequently than we thought,” noted Krüger, adding that system performance remained stable even on low-DNI days in winter.
Since the beginning of the year, Solarlite is part of the Azteq Group, which now operates the two Belgium plants as an energy service company, selling the produced steam to its customers. The solar plant at ADPO achieved a specific annual yield of 420 kWh/m2 during July 2020 and June 2021 at operating temperatures of around 300 °C, while being cleaned once in this period. The mirrors of the troughs in Oostende were cleaned twice in the first year, as the surrounding of Proviron is slightly dustier. This reduces the yield by 5 to 10 %, according to the remote control data. 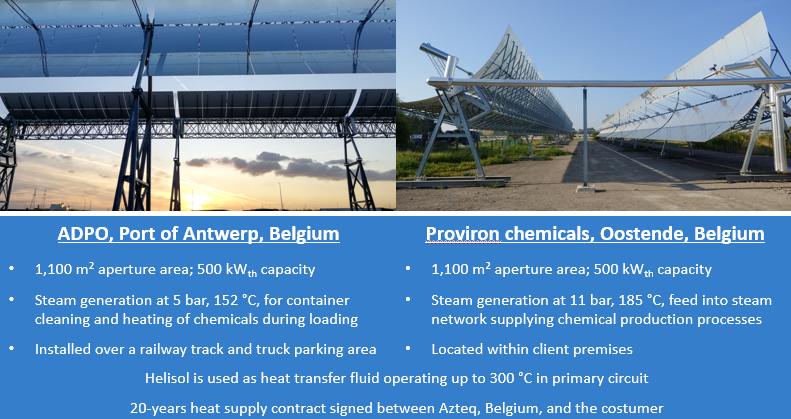 Factsheet on the two systems that supply thermal energy to chemical companies in Belgium. Adpo is short for Antwerp Distribution and Products Operation, a logistics provider serving the chemicals industry.
Source: Solarlite
Last year, parabolic trough was again the most popular solar concentrating technology, used in the vast majority of new projects. Most of these projects provided heat for processes and steam networks in industry. The table below gives a short overview of new concentrating solar heat plants commissioned between 2018 and 2020 worldwide. Projects were identified via industry surveys conducted for the solar heating and cooling section of the Renewables Global Status Report published annually by REN21. 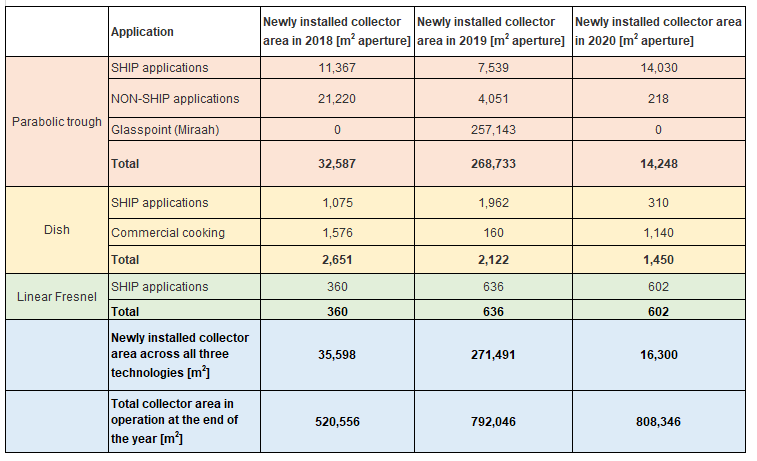