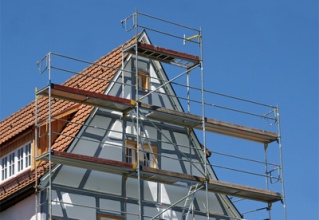 Since the beginning of the year, only a few solar thermal installations in Germany can still receive incentives from the German Market Rebate Programme for Renewable Energies (MAP). A new tax rebate for energy-efficient modernisation of buildings could encourage home owners to invest in solar thermal again. However, an agreement between the Federal Council and the government seems rather unlikely. The reform of the Renewable Energy Heating Law (EEWärmeG) has also made no progress.
Photo: s.media / pixelio.de

In summer 2011, the German parliament agreed on a tax rebate for home owners who want to invest in energy-efficiency measures. Ten years long, they could deduct 10 % of the modernisation costs – including solar thermal installations – from their taxable income. The law is part of the climate action plan by the German government. But to enact the new law, the Federal Council (the legislative body that represents the 16 German federal states) will have to agree as well – and so far, it does not seem that way. Both the federal and the state governments would lose tax money because of the new law and they cannot agree on how to split these losses. Until now, all sessions in the mediation committee have failed and there seems to be no end in sight. A complete failure of the law would mean a huge backlash for Germany´s climate goals, as space heating accounts for around 40 % of Germany´s total energy demand.

The new rebate resembles a tax refund that was MAP’s predecessor in the 1990s. According to German consulting engineer Dietmar Lange, who has worked in the sector for decades, the solar industry was very content with the system back then. “In contrast to the MAP, the tax refund did not depend on the budget. And there was a legal claim to the tax rebate, which does not apply to incentives within the MAP,” he says. The new law as discussed at the moment has one major disadvantage compared to the former one from the 1990s: It would apply only to comprehensive modernisation efforts that bring old houses close to the standard of newly built ones. This means that a single family home would need an investment of around EUR 100,000.

The reform of the Renewable Energy Heating Law (EEWärmeG) has been similarly lagging behind. The necessary field report is overdue and not expected to be published in the near future. So far, the EEWärmeG has only been used for new structures, which is less than 1 % compared to existing buildings. To actually reduce the energy consumption by 20 % by 2020, existing buildings will have to be included in the Renewable Energy Heating Law as well.

While there is no progress in terms of new laws, the so far most important incentive scheme is losing importance. In 2011, authorities have received MAP grant applications from only 51,000 out of the 166,000 new solar thermal installations, according to government and BSW Solar statistics. It seems that most solar systems in new structures are excluded from the subsidy (see database on incentive programmes). 2012 will see the basic incentive tariffs in the MAP reduced to 90 EUR/m2 instead of the previous 120 EUR/m2. Since 2009, the budget has gotten smaller year by year and has now reached EUR 250 million for 2012.

As a consequence of reduced tariffs and restrictive conditions, Germany´s solar thermal sector is unintentionally freeing itself from financial support.