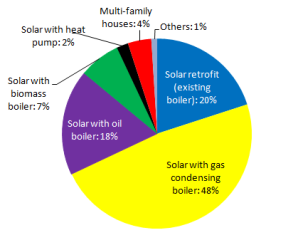 The symposium “Solar Thermal Energy” – the largest German-speaking conference dedicated to solar heating and cooling technology – has painted a mixed picture of the current development in Germany. The 3-day event, which was organised by German company Otti and took place at the beginning of May, gathered 430 researchers and industry representatives from Austria, Germany and Switzerland. The keynote speakers from the German Federal Environment Ministry, as well as from the national and international associations devoted most of their presentation time to analysing the German market. Their 2012 forecast: A 10 % plus, resulting in a newly installed solar thermal capacity of 980 MWth (1.4 million m²). The chart depicts the potential share of different heating systems combined with solar in 2012.
Source: BDH

The official market statistics of the renewable industry association BSW Solar and the heating industry association BDH show a small growth of 7.4 % in the first quarter compared to the same period last year. Together with increasing energy prices, the positive trend is reason enough for the association to be optimistic about this year’s market performance assuming a 10 % plus.

Key figures of the German solar thermal market in 2011
Source: BSW Solar / BDH
The official BSW Solar / BDH market figures for 2011 have been summarised in the table above. According to the BDH, 80 % of the solar thermal systems have been installed in order to replace a heating boiler. A condensing gas boiler and a solar system was the most popular combination, which had also the highest potential in 2012 with 48 % of the newly installed solar thermal systems (see the chart above). Around 20 % of the systems merely involved an upgrade of the existing boiler. According to the BDH assumptions, the much-discussed combination of solar system and heat pump made up only 2 % of market volume in the current year.
Installations in new buildings played a minor role on the solar thermal market, despite the federal Renewable Energy Heating Law (EEWärmeG), which has been in place since the beginning of 2009. Homeowners, as well as operators of private, commercial and public buildings have to cover a certain share of their energy demand by renewable energy. They can choose between solar thermal energy, biomass, geothermal and environmental energy.

Share of measures to meet the requirement of the federal Renewable Energy Heating Law (EEWärmeG) in 2010
Source: German Environmental Ministry

According to yet unpublished figures from the Environment Ministry’s field report on the EEWärmeG, only 20 % of the newly built houses in Germany in 2010 implemented solar thermal technology, in order to meet the law’s requirements (see chart above). Heat pumps were installed in 27 % of the buildings, 7 % covered the demand with biomass boilers. The ministry states that the share of solar thermal in newly built structures had been constantly growing over the last ten years, with only 5 % of new houses having used solar thermal in 2002. Alternative measures, such as more insulation, the use of waste heat, or connections to heating grids, were used within at least 46% of the newly built houses in 2010.

According to Dr Karin Freier, Head of the Division for Solar Energy, Biomass, Geothermal Energy within the renewable energies department of the German Environment Ministry, the long-awaited field report on the EEWärmeG will most likely be published before the summer break – however, without clear recommendations on future actions.
Freier was pessimistic about any further support measures being implemented before the next federal elections in September 2013. She confirmed that there will be a sufficient funding of EUR 366 million in 2012 for the Market Rebate Programme (MAP). It, however, seemed unlikely that the entire budget would have to be spent. According to Freier, only EUR 229 million of the EUR 312 million budget were spent in 2011, despite the fact that the founding level per m2 collector area was increased from 90 to 120 EUR/m2 last year. Since January 2012, the subsidy is back at 90 EUR/m2 (for more information, see the database of incentive programmes).
Not too much good news from the ministry in order to hope for a growing German solar thermal market – which is why it should come as no surprise that some market players deem a stagnating market as the most likely outcome this year.
More information:
Renewable energy page of the Germany Federal Environment Ministry: http://www.erneuerbare-energien.de/english/renewable_energy/aktuell/3860.php
BSW-Solar: http://www.solarwirtschaft.de/en/
BDH: http://bdh-koeln.de/en/the-bdh.html