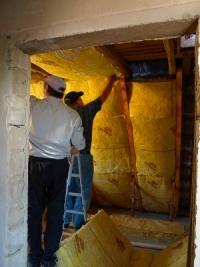 After a long debate, the tax bill for the energy-efficient modernisation of buildings died before being enacted. In summer 2011, the German parliament had agreed on the law, which was to become part of the German climate action plan. But because it would have affected the states’ budgets, their approval was needed as well. In January 2013, the Federal Council (the legislative body representing the states) announced that efforts to mediate between the federal government and the states had ultimately failed to delivery any results. The draft will not become law. There will be no tax credit for insulating one’s house. Property owners, however, can still pass 11 % of the costs on to the tenants each year.
Photo: Viktor Mildenberger/pixelio.de

The announcement comes as no surprise. Negotiations were going on for more than a year without anything close to a compromise. As a result, the KfW banking group has improved several of its incentive programmes to compensate for the lack of a new scheme.

The overall budget of the KfW programmes for energy-efficient construction and modernisation is said to be EUR 1.5 billion between 2012 and 2014. They offer loans, as well as subsidy schemes. In addition, the government has just agreed to provide an additional EUR 300 million per year until 2020. These funds will bolster one of the already existing subsidy programmes for retrofitting buildings and allow KfW to increase the subsidies paid out by the programme: Whereas they originally ranged from 7.5 % to 20 % of the investment, they are now between 10 and 25 %. The programme’s application process has just started as well.

More money for one specific programme also leaves more of the budget for other programmes. This means that the KfW will increase the repayment bonus of their existing loan programme for energy-efficient modernisation on 1 March 2013. The aforementioned programmes are for comprehensive energy-efficient modernisation measures, which result in a certain energy standard for the entire building. They may or may not include a new heating with or without renewable energies.

There will also be a new loan programme to improve a building’s heating system with renewable energies. It will probably have the biggest effect on solar thermal among all KfW programmes. The new loan programme is said to be for residential buildings only. Applicants can receive loans for solar thermal installations of up to 40 m² of collector area, for biomass boilers (5 – 100 kW), for heat pumps of up to 100 kW and, in some cases, for new centralised boilers as well. The maximum loan amount is EUR 50,000; the interest rate has not been announced yet. In addition, homeowners are not the only ones who can apply for the grants. Contractors can, too, if they invest in the new heating on the homeowner´s behalf. Homeowners will be able to apply for both the loan by KfW and the grant from the German Market Rebate Programme for Renewable Energies, MAP. The programme is expected to start in March 2013.

Jörg Mayer, director of the German solar industry association BSW Solar expects that this new programme together with the improved subsidies in the MAP might finally push solar thermal. “In future, the complete investment for a switch towards solar heat can be financed”. This might at least stabilise the market or maybe even cause a growth, Mayer says.

Another bill relating to building modernisation in Germany is still under review. The German parliament is introducing several changes to the tenancy law, which is currently posing a challenge for retrofits with or without integrated solar water and space heating. German law guarantees tenants the right to reduce the rent when they have to accept inconveniences, such as noise or dirt, due to construction being done around the house. After the planned reform, in case of energy-efficient modernisations, tenants will have to accept the inconveniences without any rent reduction for 3 months. As in the former version of the law, the retrofit would also give the property owner the right to increase the rent by 11 % of the retrofit costs per year. Tenant associations consider this to be too much, as it will not pay back for the tenant by reduced heating costs alone.

The changes are subject to intense debate. If a decision is reached quickly, the law could be enacted in March 2013. But it may just as well not be settled before the election this autumn. The problem for solar is the same as with any pending improvement: Investors will wait for better conditions.

More information (in German only):
Tax credit bill dies before being enacted: