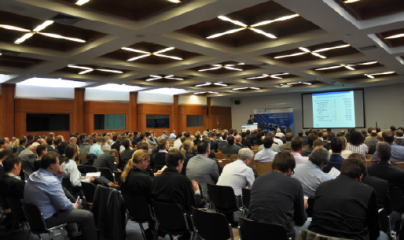 According to the German solar industry association, BSW Solar, and the German heating industry association, BDH, the country saw an 11 % decrease in newly installed solar collector area in 2013, bringing market volume down to 735 MWth (1.05 million m²). The analysis presented by BSW Solar Managing Director, Jörg Mayer, at the Solar Thermal Energy Symposium in Bad Staffelstein pointed most of all to a slump in the German market segment of solar combi systems for domestic hot water and space heating in existing buildings. The symposium, which took place at the end of May, is now in its 24th year and gathered 333 scientists and solar thermal industry representatives from the German-speaking region.
Photo: East-Bavarian Institute for Technology Transfer, OTTI
For the first time, the market analysis by BSW Solar looked at the trends in different market segments: new build, retrofit, domestic solar water heaters, as well as combi systems. The figures in the following table are the result of estimations based on the number of applications submitted to the German Market Rebate Programme for Renewable Energies, MAP, and the statistics on new building permits.
Source: BSW Solar /BDH, Destatis, own calculations by BSW Solar, preliminary data for 2013
The market segment of combi systems for existing buildings, in which the industry sees the greatest potential, shrunk more than any other segment: The market decreased by one third compared to the previous year and was down to only 30,000 sold systems in 2013. Combi systems in existing buildings made up only 22 % of all newly installed systems last year; in terms of collector area, the share was 30 %.
Including combi systems in the national support scheme
And this at a time when combi solar systems for existing buildings are the only market segment for single- and two-family houses still being promoted by the Federal Office of Economics and Export Control, BAFA. Mayer, however, does not view the dramatic development as a failure of the effectiveness of the MAP programme. On the contrary, his association has been calling for a renewed inclusion of combi systems for new builds in BAFA subsidy schemes. Every time the minimum standard for new buildings of 4 m² of collector area specified in the Renewable Energies Heating Law (EEWärmeG) is exceeded, the state should support the investment, both the BDH and the BSW agree.
"We need to promote solar better," is the first item on Mayer’s list to help the industry out of its plight and use the climate protection potential of solar heat effectively. Mayer‘s second and third priority: "We must lower our solar system prices for end customers and we must solve the plumber shortage." The scientific conference chair of the solar thermal symposium, Harald Drück from the University of Stuttgart’s ITW, agreed with Mayer. Reducing installation costs through plug and play standards must be the industry’s chief concern. This should also include alternatives to three-tier distribution, Drück said.
No shortage of plumbers
BDH Solar expert Carsten Kuhlmann from heating system manufacturer Viessmann identified somewhat different priorities: Although – like BSW managing director Mayer – he called for installations exceeding the EEWärmeG requirements to be subsidised, he doesn’t see any shortage of plumbers. He said that such a shortage had not even been present during the record year of the German solar thermal industry in 2008: "2008 was possible. Plumbers’ priorities were simply different. But it is the customer who decides which priorities the plumbers should have." The spokesperson of the BSW working group Solar Thermal, Matthias Reitzenstein, took up the argument: "The image of solar heat and renewable energies in total was a different one in 2008. We would need an image campaign."
The BDH statistics on the German heating market clearly show which heating technology was popular with German end customers in 2013 (see the following table).
Market development in the German heating sector
Source: BDH
Other than that, the gathered experts from science and business could often be heard saying during the conference that the federal government had tarnished the reputation of solar energy in general by starting a debate about the promotion of photovoltaic energy and its restrictions during the current drafting of the Renewable Energy Sources Act, EEG. Solar thermal was being dragged down together with its “sister” technology.
This news was written by Guido Bröer, founder and co-editor of the German newsletter Solarthemen, which covers twice a month all renewable energy technologies. http://www.solarthemen.de