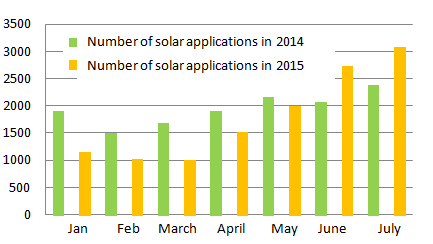 Finally some good news from Germany, the largest market in Europe, which declined for four years in a row between 2011 and 2014. After a very sluggish first quarter in 2015, demand for solar thermal systems was increasing over the summer months because of the increased subsidy levels of the German Market Rebate Programme for Renewable Energies since April 2015. The number of applications for solar thermal systems in June and July was 31 % higher than in the previous year. The chart shows the applications submitted per month, with the green columns depicting 2014 and the orange columns representing 2015. And there is more good news for the sector: the announced energy label for existing heating boilers.
Source: Federal Office for Economic Affairs and Export Control, BAFA
“It has never been more attractive to invest in solar thermal,” emphasised Carsten Körnig, one of the Managing Directors of the German solar thermal industry federation BSW Solar. The subsidy level for combi systems of hot water and space heating of up to 14 m² increased from EUR 1,500 to 2,000. And all other applications, such as process heat and solar cooling, receive higher specific subsidies of 140 EUR/m², up from 90 EUR/m². For more information, please consult the database of incentive programmes.
But a plus of 30 % compared to 2014 is not entirely satisfactory in light of the fact that the newly installed collector area in 2014 was only 900,000 m², not even half the amount that was installed in the boom year of 2008 with 2.1 million m². So, there is a lot of room for improvement – exactly how much room shows the development in the heat pump sector. Application figures outright exploded with a more than 400 % plus in June and July (see the following table). Demand for biomass boilers, however, was hardly influenced by this positive trend: Even in June and July, the number of applications was lower than in the year before.
Increase or decrease in the number of applications in 2015 compared to the same period in 2014.
Source: BAFA
“The monthly number of solar applications in June and July this year is still below 2013, which was hit by a much higher oil price,” says solar thermal expert and consultant Dietmar Lange from Germany. According to his experiences, demand for solar thermal technology usually more or less stagnates during summer because of the holiday season. The monthly sales statistics by the two German solar and heating associations, BSW Solar and BDH, confirm his assessments. After a clear plus of 10 % in collector sales in June compared to the previous year, numbers went down again in July with -7 %. By the end of July, cumulated sales were 14 % below the weak year of 2014. Vacuum tube collector suppliers are faring slightly better than flat plate manufacturers (see the following table). Still, as one knows from past experiences, it often takes six months or longer until MAP changes translate into sales.
Increase or decrease of the reported sales of collector manufacturers and system integrators in Germany in 2015 compared to the same period in 2014.
Source: BSW Solar/BDH statistics
Both associations support the planned energy label for existing heating boilers in Germany. The government decided in the middle of August that old heat boilers up to 400 kW can be equipped with an efficiency label, such as the energy label for new hot water and space heating systems, which will come into effect all across Europe on 26 September. The aim is to motivate homeowners to replace their heating systems after they have been in operation for a certain number of years, as these systems will receive a log rating of F or G.
From January 2016 plumbers, chimney sweeps and energy consultants will be allowed to issue the label, which measures the efficiency of the boiler according to a scale from G to A++ – on a voluntary basis. As per the decision paper from the German ministry council, the label should then become mandatory step by step. From January 2017 on, chimney sweeps will be obliged to label all boilers manufactured in 1994 or beforehand. The next step will be implemented in July 2020 when the labelling obligation will be extended to include all heating boilers manufactured in 2008 and earlier. In 2024, all boilers that are more than 15 years old will have to carry a label. The initiative is intended to speed up the rate of retrofitting old heating systems, which is definitively too low at the moment with 2 to 3 % per year. Any boiler replacement allows the switch to renewable heat and opens up the possibility of installing a solar thermal system. According to a press release by the BDH from 2013, “75 % of the 20 million installed heating systems in Germany consume too much energy. At the current annual exchange rate of 3 %, it will take 30 years to bring the outdated stock energy-wise into shape.”
More information:
Associations: http://www.bsw-solar.com, http://www.bdh-koeln.de/en.html
More information about the MAP in German: BAFA and BMWI (links verstecken)
http://www.bafa.de/bafa/de/energie/erneuerbare_energien/solarthermie/index.html
http://www.erneuerbare-energien.de/EE/Navigation/DE/Foerderung/Marktanreizprogramm/marktanreizprogramm.html;jsessionid=764599BC68D4C436536EFF2A0E8C36F7