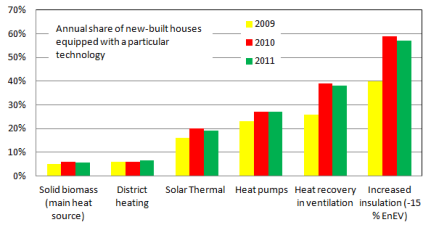 With almost one year of delay, the German government finally published the mandatory evaluation on the effects of the Renewable Energies Heating Law (EEWärmeG) in December 2012. The German ministries involved had a hard time to agree on whether the existing measures are enough to fulfil the 2020 target of 14% renewable heat or whether stricter laws and higher financial incentives would be necessary. The final report is a compromise which seems to have no clear goal: On the one hand, it states that there is no need for short-term changes. On the other hand, it says that the share of renewable heat will only reach 12.2 % by 2020. The chart shows that heat pumps profited much more from the EEWärmeG than solar thermal technologies.
Data Source: German Federal Environment Ministry

Since the beginning of 2009, the EEWärmeG has required from developers of new buildings that they either use renewable energies for heating or equally good energy-saving measures. As it turned out, about half of the house builders had opted for renewable energies, the other half had chosen to install alternative measures, such as increased insulation or district heating. Among the renewable technologies, the heat pump was the most favoured technology (27 %), followed by solar systems (20 %) and solid biofuels (5 to 7 %), e.g., wood pellets (see the attached EEWärmeG report in German).

Compared to existing residential buildings, the share of renewables in new buildings has been on the rise since the introduction of the EEWärmeG. The chart above shows the annual share of newly built houses equipped with a particular technology. This effect is much stronger for heat pumps and biomass boilers than for solar thermal: heat pumps make up 60 % in the market for new buildings and biomass is responsible for another third. When it comes to solar thermal, only every seventh system finds its way on a new building. In other words: existing residential buildings are still the main market for solar thermal, but a shrinking one at that. The market for new buildings is smaller, but growing.

When it comes to solar and biomass heat, the authors of the study see no need to change something in the EEWärmeG in the near future. They merely recommend looking into the matter of stricter efficiency rules for heat pumps and the use of these pumps as a variable load to stabilise the electricity grid.

The most important incentive instrument for this segment has been the Market Rebate Programme for Renewable Energies (MAP). The MAP includes subsidies by the Federal Office of Economics and Export Control, BAFA, and low-interest KfW loans. The former are financed through the federal budget, the latter by the Energy and Climate Fund.

As both programmes mainly address existing buildings, they complement the EEWärmeG. While the KfW incentives were widely accepted and successful, the BAFA subsidies have experienced many ups and downs due to budget restrictions. According to the authors of the evaluation, the share of newly installed renewable energy heating in existing buildings has been decreasing since 2008 – the BAFA subsidies were only able to slow this process down somewhat. Due to these disillusioning findings, they strictly recommend a more reliable funding for the BAFA subsidies. The money should not only come from the federal budget but also from the Energy and Climate Fund.

Altogether, renewable energies have reached a share of 11 % of the consumed heat in Germany. The government has set a goal of 14 % by 2020. Although this target does not look like a big step to take, the authors only came up with a share of 12.2 % if all conditions stay as they were by August 2012. Only with stricter laws and higher financial incentives for the energy-efficient modernisation of buildings, the share could reach more than 14 %.