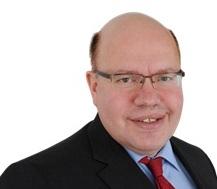 The Federal Environment Ministry has approved new frame conditions for the MAP, the national Market Rebate Programme for Renewable Energies. Since 15 August, house owners have been receiving a minimum subsidy of EUR 1,500 for a solar combi system, which supplies hot water and space heating. The original tariff of 90 EUR/m2 stays in place additionally. The German Environment Minister, Peter Altmaier (see photo), has also reinforced the state’s commitment to process heat: Clients can now receive a subsidy of 50 % of the net investment costs under the MAP programme. So far, the only measure to cover part of the investment costs (30%) had been a low-interest loan by the German KfW banking group.
Photo: German Environment Ministry

The amendments to the programme have been a response to the low demand for the subsidy scheme in the past. Last year, EUR 83 million of MAP funds were not distributed because market development was rather slow. These funds have been added to the 2012 budget (see the following news). The second reason for changing the programme’s rules has been the recently published Solar Heat Roadmap, which emphasised the large long-term potential of process heat. Also, the solar thermal industry noted that the 30 % low-interest loan by KfW has simply not been attractive enough to increase the demand for process heat installations. The new MAP regulations will allow commercial clients, which buy a process heat system with a collector area of between 20 and 1,000 m2, to choose either the low-interest loan or a 50 % grant on the total net investment.

“The heating market will play a crucial role in renewable energy strategy over the coming years,” says Altmaier. “The new funding rates will make it even more attractive to change to renewable energy sources when it comes to heating and hot water supply.” The German market needs new impulses for growth – quickly. The monthly solar thermal statistics of the two German associations BSW-Solar and BDH show only a 1 % increase over the first six months of 2012 compared to last year. Both associations had still predicted a 10 % growth at the German conference in Bad Staffelstein in May (see the news article).

But, the improved MAP guidelines do not only affect the solar process heat sector, but also the construction industry. In particular:

Market experts think the new MAP rules for the residential sector could have an effect on the market in the second half of 2012, because the amendment has been announced way before the start of the heating season. Process heat, however, requires intensive sensibilisation and long planning periods, which means that the first scheme-related installations should not be expected before 2013.