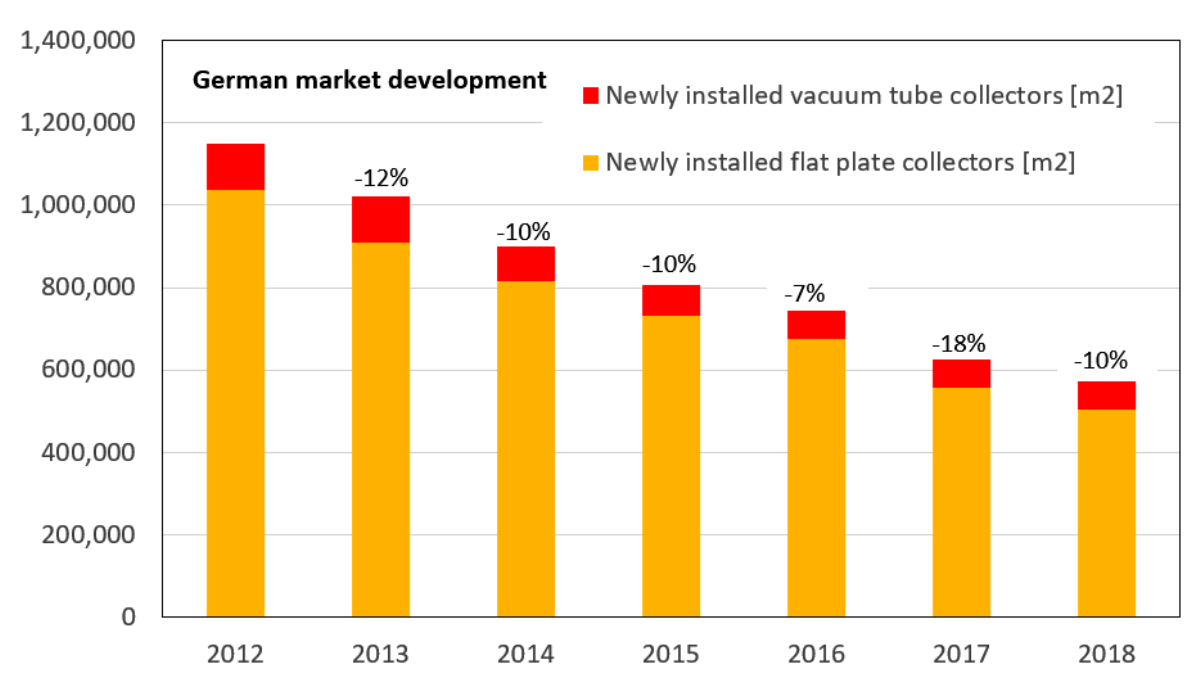 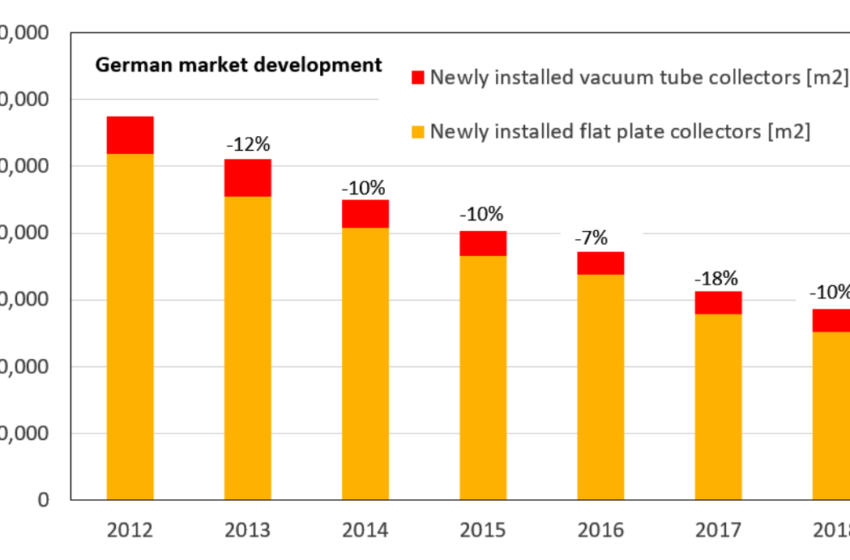 Despite a booming building sector and a national support programme, the German solar thermal sector had to grapple with another decline in sales, this time by 10 %, in 2018. Statistics compiled by the associations for the solar and heating industries, BSW Solar and BDH, indicate the addition of around 71,000 solar thermal systems last year compared to 78,000 the year before. The above chart shows the annually installed collector area, which was 573,500 m² in 2018 (401 MWth). By contrast, the share of vacuum tube collectors has stayed fairly stable since 2012, ranging from 9 % to 12 %.
Source: BSW Solar/ BDH
The two associations underlined that few building owners knew enough about the German Market Rebate Programme, or MAP, to apply for incentives. “Many government programmes fly under the radar and do not support all relevant options. This means the full potential of solar energy remains untapped when putting up newbuilds or replacing old boilers,” Carsten Körnig, Managing Director of BSW Solar, was quoted as saying in a February press release.
One of those options is the installation of a solar thermal system in a newbuild, for which there is no MAP support at present. Still, the programme offers between EUR 2,000 and EUR 3,600 for building retrofits in the residential market. If a solar system provides hot water only, the grant is at least EUR 500 but can get up to EUR 2,000.
Too few replacements
One reason for the disappointing sales figures has been the slow rate of boiler replacement: Only 20 % of the 32 million heating systems in Germany run on renewables, according to an annual market report published last June by BDH and ZIV, the German National Association of Chimney Sweeps. This report also shows that in addition to 2.3 million solar thermal systems, there were about 0.8 million biomass boilers and 1 million heat pumps in Germany.

Germany’s 20.7 million monovalent heating systems, broken down by technology. Solar thermal systems are not part of this chart, as they are always installed in combination with another heat source.
Source: ZIV
Most heating systems in Germany were quite inefficient, the associations concluded. “Every second heating system is over 20 years old. Once you get to 15 years, a boiler can no longer be considered energy-efficient by current standards,” Oswald Wilhelm, President of ZIV, said, according to a press release published in early August.
So far, the government has relied on the labelling of existing boilers to encourage replacement. New rules introduced in 2017 require chimney sweeps to assess the efficiency of old boilers, which often results in a D or E rating. In all, 2.1 million systems have already labelled, according to ZIV. And yet, the impact of the measure on sales has been negligible. “At present, few of those standard heating boilers that have run for over 30 years are being replaced, despite what has been stipulated in the EnEV energy efficiency regulations,” German-based solar thermal consultant Dietmar Lange said, blaming the lack of progress on the large number of legal exceptions. For example, “people who live in their own one- or two-family house before 1 February 2002 are exempt from the rules.”
Lange has a weekly newsletter, in which he analyses the most recent reports on (renewable) heating and the latest trends in the German market. According to him, multiple heating and building associations have called for tax rebates for home owners because they are convinced that this will encourage many more to retrofit their homes.
Associations mentioned in this article:
BSW Solar: http://www.solarwirtschaft.de
BDH: http://www.bdh-koeln.de/
ZIV : https://www.schornsteinfeger.de/