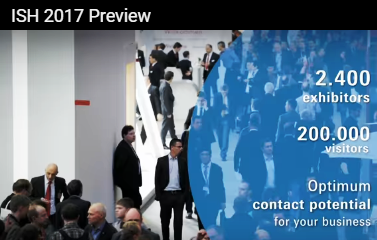 Three weeks before the ISH 2017 opens its doors again between 14 and 18 March 2017, the German renewable heating associations published their annual market statistics for 2016. The trend is clear: Low oil and gas prices have reduced demand for solar water heating systems (-8 %) and biomass boilers (-3 %), whereas the German heat pump industry can be more than satisfied with 17 % growth. The ISH is Europe’s largest trade fair for bathroom design, energy-efficient heating, air conditioning and renewable energies and takes place every two years in Frankfurt, Germany.
Image taken from the ISH 2017 announcement video: http://ish.messefrankfurt.com
The following table illustrates how sales of the three major renewable heating technologies have developed since 2014. The two main factors aiding growth on the heat pump market had been strong financial support by the German Market Rebate Programme (MAP) since April 2015 and the tightening of rules in the Energy Saving Ordinance, EnEV, at the start of 2016, concluded German consultant Dietmar Lange.
Market statistics from the relevant German industry associations. The solar thermal market statistics are published jointly by the solar industry association BSW Solar and the German heating industry association BDH. The figures on biomass boiler sales came from the German Fuelwood and Wood Pellet Association, DEPV, and the heat pump sales were published by the Federal Heat Pump Association, BWP.
Conversely, the solar thermal market has been suffering from a continuous decline since 2012, despite the large subsidy amounts offered by MAP to recoup the investment. Low fossil fuel prices seem to have a stronger hold over investment decisions than large sums of subsidy money. Lange said that the negative impact of low oil prices primarily showed in the declining number of combi systems for hot water and space heating. He credited 2009’s introduction of the Renewable Energy Heat Act (EEWärmeG) with keeping the newly installed collector area nearly stable each year. The Heat Act stipulates that privately and publicly owned buildings meet a certain share of their occupants’ energy demand by renewable sources.
The BDH/BSW statistics are based on a monthly survey among the most important German collector and tank manufacturers and suppliers. Together, they serve around 80 % of the market. The following table shows that the year-on-year ratio of flat plate (91 %) to vacuum tube collector technology (9 %) has remained the same. Sales of both types of collectors dropped by 8 %.
Websites of organisations mentioned in this article:
http://www.depv.de
http://www.solarwirtschaft.de
http://www.waermepumpe.de