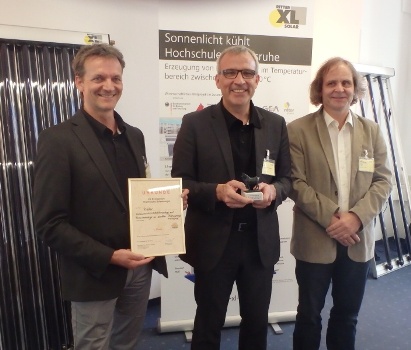 All smiles from Ritter Group management during the German Solar Thermal Technology Symposium at the beginning of May after they were given the innovation award for the demonstration plant of a steam-producing solar vacuum tube collector combined with a steam-jet chiller (from left): Thomas Weidemann, Division Manager Solar Collectors, Jürgen Korff, Chairman of Ritter Group management, and Dr Rolf Meißner, Managing Director of Ritter XL Solar. Ritter is a German manufacturer of CPC vacuum tube collectors. Five companies – among them Viessmann, Vaillant and Magontec – had applied for the award with a total of seven innovative technologies. The award is presented annually by the conference’s organiser, the East-Bavarian Institute for Technology Transfer, OTTI.
Photo: Bärbel Epp
The demonstration plant opened up new possibilities for solar heat applications and went towards reducing kilowatt-hour prices, the jury explained its decision. The award means a great deal to Korff, after having worked four years on the development project which culminated in the commissioning of the solar steam cooling plant at the Karlsruhe University of Applied Sciences, Germany, in spring of 2014. The system’s special features: Water is evaporated at up to 250 °C by means of a vacuum tube collector field and is pumped directly into the steam jet chiller without requiring a heat exchanger. In the chiller, the steam expands rapidly and cools the water down to 6 °C – a temperature that can be used instantly to cool laboratories and offices. “We have minimised the heat losses of the vacuum tube collector,” Weidemann explained. Ritter monitored a solar yield of 400 kWh/m² for the demonstration plant, which is a good value considering the high temperatures, and the company aims at reaching 460 kWh/m²a by optimising the system further. The manufacturer has developed the automatic steam production control in-house, which was an important requirement to get the steam cycle under control. The steam-jet chiller was developed by German process technology specialist GEA Wiegand.
Superheated steam directly from collector field into steam-jet chiller
“We are proud to enable process heat applications above 150 °C by means of our plasma vacuum tube collectors – even under Germany’s irradiation conditions,” Korff summed up the unique selling point of the demonstration plant. This feat has been made possible by what Ritter introduced as plasma coating in 2012: adding an anti-reflective coating to the outside cover of the outer glass tube to reduce the collector’s optical losses. According to the company, the plasma coating manufactured in-house increases the yearly energy yield of the collector by 20 % at high temperature output.
At Karlsruhe University of Applied Sciences, the collectors are connected in a row, as is common with larger fields at normal pressure of 3 to 4 bar. Each collector raises the water temperature by several degrees until some water has evaporated. The 150 °C wet steam is continuously heated at the end of the collector row until it overheats, dries out and reaches temperatures of around 250 °C as superheated steam. “The stagnation temperature of our collector is 350 °C, so we are used to handling steam in our collector systems,” Meißner explained. The Managing Director of Ritter XL Solar plans to offer the new solar technology for steam applications to chemical and food industry businesses.
More information:
http://www.gea-wiegand.de/
http://www.ritter-gruppe.com/