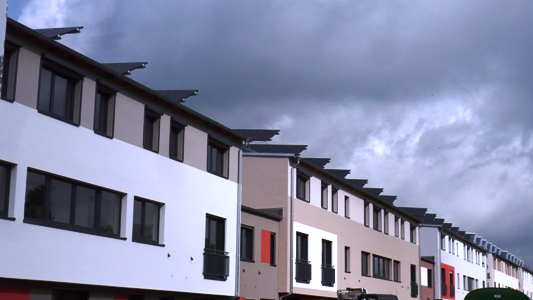 Generation of solar heat and solar electricity. For many years, products have entered and disappeared from the market without leaving much of a trace. German company PA-ID has installed around 8,000 2Power panels, at almost 500 project sites. The 2Power elements consist of standard PV laminates with a polymer heat exchanger at the back, enclosed by insulation. In July, a group toured to the so far largest installation with 121 kWth and 44 kWel in Unterliederbach, a suburb of the German city of Frankfurt.
Photo: PA-ID
The size of the system doesn’t seem that remarkable compared to many other PV installations in Germany, but project manager Alban Heßberger from PA-ID pointed out that projects were getting bigger. The 168 modules of the newly built housing project in Unterliederbach have so far constituted the company’s largest showcase. By using 2Power modules, German planning services company B&O was able to comply with the on-site heat and power generation requirements which the city had asked for during the invitation to tender. The size of the solar field was determined by the available roof space: One half of the roof area was used for the PVT collectors, whereas the other half saw the installation of vacuum tube collectors feeding heat into a district heating network. The district heating source also serves as back-up heat supply, although the annual net energy balance has shown that it receives more heat from the collectors than it provides to the buildings. Additional back-up heat has been provided by electric heaters in every building.
Simulations with Polysun have indicated that PVT modules produce 10 % more electricity per installed square metre of capacity than similar PV modules which have no heat absorber at the back. Heßberger said that existing plants showed the simulation data to be fairly reliable. There was no comparative field measurement of both module types – even if different modules are used, the entire plant is usually connected to the same inverter, so there is no separate evaluation of yields.
The modules also produce around 300 to 350 kWh of heat per m² at changing temperature levels of between 30 and 60 °C. “We adjust the flow to operate the system at a steady temperature difference between tank and collector, so that we can generate a lot of heat at low temperatures and heat up the tank gradually. When we can no longer store energy in the buffer tank, we switch to a low-temperature tank, so that we can continue harvesting solar resources,” Heßberger said. In Unterliederbach, the tank is a 150,000 m3 ice storage unit; in other projects, it may be underground seasonal storage or geothermal probes.
Save space for separate PV and solar thermal systems
Usually, the solar heat is consumed directly for domestic water heating in summer, preferably by using a hot water station that will allow rather low temperatures without the risk of legionella contamination. During the heating season, the solar heat is utilised to increase the source temperature of a (single) heat pump to about 16 to 18 °C.
To achieve the same yield of heat and electricity, it would require a 50 % increase in size if PV and solar thermal systems were separate components, according to the above-mentioned calculation model. This calculation is based on the assumption that a PV field of about the same size as the PVT installation would be required to produce the same amount of electricity. In addition, a solar thermal field of about half the size would be necessary to produce the same amount of heat, assuming a yield of 700 kWh/m²*a.
Compared to a separate solar thermal and PV system, the 2Power installation cost about the same in materials, Heßberger said, but money could be saved by lowering the cost for installation. He added that the maximum stagnation temperature of the PVT module was around 83 °C, “like a poorly ventilated in-roof PV installation”. This led to a long lifetime of the antifreeze in the solar circuit and allowed PV power production even when there was a defect or stagnation present in the thermal system.

Schema of a 2Power element
Chart: PA-ID
“Sandwiched” PV module and polymer heat exchanger
2Power uses standard PV laminates. A specially designed temperature-resistant polymer heat exchanger lies behind it, followed by insulation and a back-side sheet of aluminium. The entire “sandwich structure” is held together by spring clamps made of stainless steel. This process will avoid tension between the layers, as these respond differently to changing temperatures.
In addition to the 2Power modules, PA-ID manufactures normal PV modules with the same design specifications, battery systems and heat storage tanks. To increase the variety of system designs, the company offers storage systems with separate hot water and solar stations as well as other system components from third-party manufacturers, such as heat pumps and inverters. PA-ID is developing its own home automation system, which is said to include energy management. The company was founded in 1995 as a special-purpose machinery manufacturer and has close to 50 staff.
More information:
PA-ID: http://www.2power.de/en/homepage