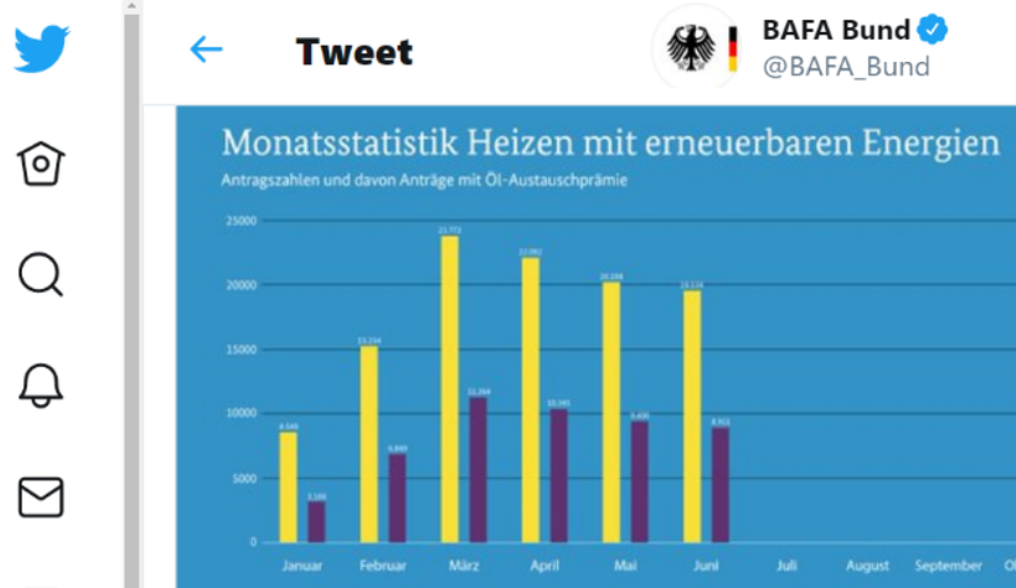 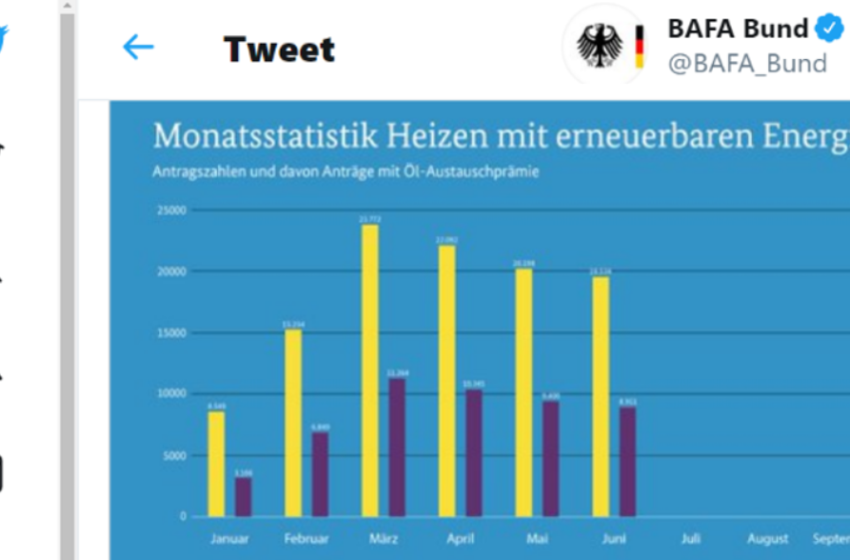 The German government’s decision to extend funding opportunities for clean heating projects this January has led to rising demand for solar thermal systems. During the first seven months of 2020, businesses sold 14 % more flat plate and vacuum tube collectors than in the same period last year, according to statistics compiled by two national associations for the heating and the solar industry, BDH and BSW Solar. Moreover, BAFA, the agency managing the country’s Market Rebate Programme, reported a 200 % surge in applications for solar thermal systems compared to the first half of 2019. This jump was the result of significantly improved funding conditions and the German government’s announcement that it is planning to impose carbon prices on heating oil and natural gas at the beginning of 2021.
Chart: BAFA’s 31 July tweet on MAP application figures
Since the beginning of this year, MAP has supported solar heating systems with grants of up to 35 %, as well as up to 45 % if they replace oil heating. According to BAFA’s statistics, 26,991 applications for solar thermal grants were submitted to the agency between January and June, compared to 8,700 in the same period last year. Biomass boilers and heat pumps also showed strong increases (see the following table).
A fourth, newly added category called ‘gas hybrid and renewable-ready’ came to 16,244 applications. This funding opportunity offers a 20 % investment grant if a household adds a solar thermal system to a new gas condensing boiler. The new boiler must include a storage tank and a controller to allow the operation of a hybrid system.
Number of applications, broken down by year and technology
Source: BAFA, compiled by Dietmar Lange
*January to June 2020
Market recovers after 9 years of declining sales
The 14 % increase in collector sales in the first seven months could mark the beginning of a new era. From 2012 to 2019, the German solar thermal market hit a new low every year, dropping from 1.15 million m2 (805 MW) to 0.51 million m2 (358 MW) – a decrease of over 50 %.
However, “despite our fears over the impact of Covid19 on the economy, we are seeing a bump, not a slump, in investment thanks to growing climate action in recent years, radically improved incentive levels and the anticipated implementation of carbon pricing,” Carsten Körnig, BSW Solar’s Managing Director, was quoted as saying in a press release published on 10 August. Compared to last year, the BDH-BSW sales statistics show a remarkable 41 % and 30 % jump in June and July, respectively.
Yet another reason for a brighter outlook is the climate business index surveyed among solar thermal system suppliers and installers that BSW Solar created in 2005 to take the pulse of the sector each quarter. The index climbed by 70 points in only three months, to 134 points in July, its highest level in 10 years.
As BSW Solar expects demand for MAP grants to remain high as well, it lobbied, successfully, for EUR 300 million in additional funding, which has recently been approved as part of the programme’s second budget revision.
BSW Solar’s two German-language infographics about the current funding and market environment can be found at the following link: https://www.solarwirtschaft.de/presse/mediathek/
Organisations and programmes mentioned in this article:
BSW Solar: https://www.solarwirtschaft.de/en/home/
BDH: https://www.bdh-koeln.de/en/
BAFA: https://www.bafa.de/EN/Home/home_node.html
MAP: https://www.bafa.de/DE/Energie/Heizen_mit_Erneuerbaren_Energien/heizen_mit_erneuerbaren_energien_node.html (in German)