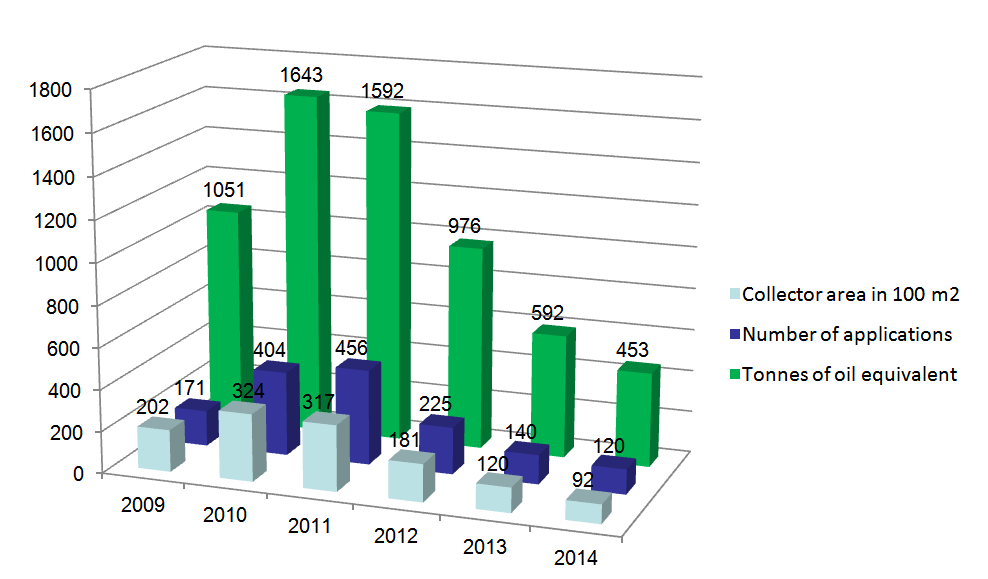 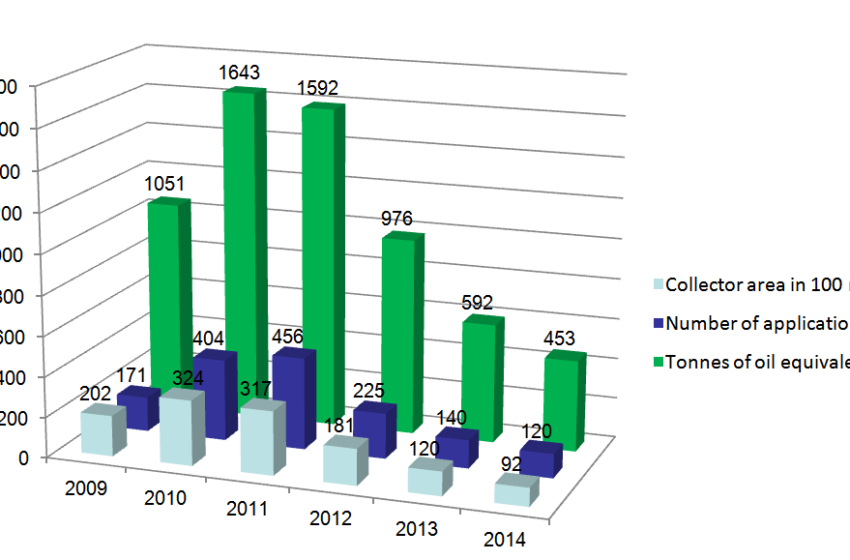 The French energy agency Ademe has been supporting renewable heat production in the industry, the district heating sector and at multi-family buildings since 2009. The budget of the national subsidy scheme, Fonds Chaleur (Heat Fund), will double in amount from around EUR 240 million per year to EUR 420 million in 2017. During 2009 to 2014, solar installations accounted for as little as 6 % of Fonds Chaleur’s EUR 1.2 billion (see the attached report). Despite the high subsidy amount, the number of solar thermal applications is declining, as is the French solar market in general. Ademe is trying to counter the negative trend by offering new incentive schemes to address the large solar systems segments.
Source: Ademe

Between 2009 and 2014, Fonds Chaleur helped finance a total of 1,514 solar installations – 1,377 in France and 137 in the French overseas territories – the equivalent of 123,000 m2 of solar collectors. Among the total are a small number of 17 industrial installations amounting to almost EUR 1.4 million, with one project at dairy producer Bonilait Protéines having around 1,500 m2 of solar collectors.

Fonds Chaleur can cover between 20 % and 70 % of the solar installation costs. The number of financed projects was growing between 2009 and 2011, but demand has been decreasing since 2012 (see the chart above). “Our difficulty is that we don’t receive enough solar applications, especially in the multi-family housing sector,” Bouzid Khebchache, Deputy Head of Ademe’s renewable energies department said with regret. “We have to remind building owners that the Fonds Chaleur budget can help their solar projects. But the solar branch has only really begun to communicate this around the time of the solar action plan SOCOL at the beginning of this year. It will take some time to regain a strong customer base.”

Since 2012, Fonds Chaleur has been complemented by another incentive scheme, the call for proposals, entitled New Emerging Technologies (Nouvelles Technologies Emergentes, also known as NTE). This program intends to support technologies that are mature but with which France has still little experience, such as solar heating in multi-family housing or solar cooling in the industry. Once these technologies have been monitored and evaluated, they can expect grant support by Fonds Chaleur just like other installations. Between 2012 and 2014, the NTE program has awarded grants of almost EUR 4.9 million. Solar thermal projects and district heating made up only 3 % of the total budget, the largest share of 45 % was allocated to applications from “boucle d´eau tempérée”, which means heat pumps using warm water (water from sewage, the sea, rivers, lakes, etc.) as the energy source.

Subsidy for large-scale systems
In March 2015, there was a second call for proposals, this time for large solar array projects (Grandes Installations solaires thermiques) of more than 300 m2 to be installed at multi-family buildings, on industry premises and at hospitals, as well as of more than 500 m2 in case of district heating. Public funds cover between 50 % and 70 % of the preliminary studies and between 45 % and 65 % of the total investment. By early November, Ademe had received 5 proposals for large-scale systems, but the second application deadline is still far away, ending in April 2016. “The proposals we have received so far came mostly from the multi-family building sector,” Khebchache said. “The industry expects short ROIs, and the drop in natural gas prices makes it more difficult to convince the industrial sector of solar installations. We also hope that we will have more projects in the district heating segment by the end of the second application period.”

Vincent Boulanger is a freelance journalist specialised in renewable energies and based in Hamburg, Germany.