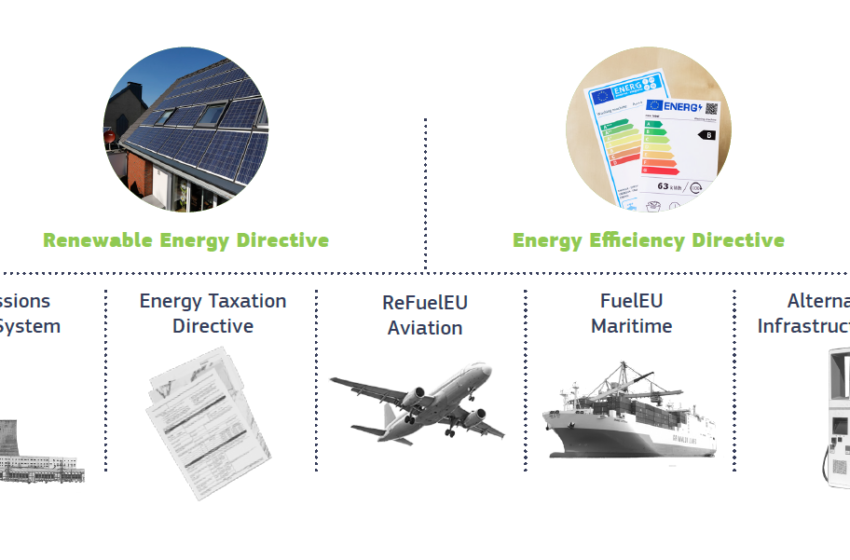 On 14 July, the European Commission fulfilled its promise and published the Fit for 55 package, which includes revisions to five of the EU’s core climate and energy directives and two new initiatives, ReFuelEU Aviation and FuelEU Maritime (see chart). The aim of the package is to bring the legal framework in line with the Union’s recently tightened net GHG emission reduction targets of at least 55 % by 2030 compared to 1990 levels. Brussels-based renewable energy associations have hailed the package as a crucial step forwards but criticised some of its important sector-specific targets as not ambitious enough. The proposed changes and additions will now be debated among members of the European Parliament and the European Council.
Chart: European Commission’s Energy Factsheet
“With today’s proposals, the Commission is presenting the legislative tools to deliver on the targets agreed in the European Climate Law in October 2020 and fundamentally transform our economy and society for a fair, green and prosperous future,” said the press release posted on the same day as the publication of Fit For 55.
In response, WWF Germany issued its own press release on 21 July, stating the commission’s proposals “are a necessary and important step in the right direction”. The association went on to laud the EU for creating a “package covering all relevant sectors” and proposing a “mix of policies including regulatory and market measures, as well as instruments at EU level and individual targets for member states.”
The European Heat Pump Association (EHPA) also heaped praise on the commission for combining the introduction of carbon prices in the transport and building sectors with the implementation of a Social Climate Fund, a mechanism hoped to provide extensive support to low-income households in Europe. “One cannot go without the other,” its 14 July press release reads.
In addition, the EC has prepared 10 factsheets for those who want to get a quick overview of what the new legislation entails. Each factsheet is available in all official EU languages, with four factsheets considered the most relevant to the SHC sector (you can download the documents in English by clicking on the links at the bottom of this article):
In this context, the following numbers related to the EU’s renewable and energy efficiency targets are certain to generate a lot of debate among representatives of associations, the EC and member states in the coming weeks and months:
The most crucial decade for decarbonising the heating market is now
The initial press releases published by renewable energy associations after the launch of the package have already pointed out that some of the numbers currently being circulated are too low to maintain the 1.5 °C goal. For example, Solar Heat Europe has said that the 1.1 percentage point target for renewable heat needs to be raised to 3.1 and that the new sector targets for district heating networks (2.1 %) and industry (1.1 %) need to be made binding. And although Solar Heat Europe appreciates the EU’s idea of an ambitious 49 % target in the building sector, the association underlined that this objective needs to go hand in hand with a programme to replace old, inefficient heating and cooling units with new, efficient and renewable solutions at a rate of 6 % a year.
The EHPA has likewise called for a binding renewable heating and cooling increase above 1.1 % a year. The technology to expedite market growth has already been available, it said, “hence, this figure must and can be doubled” to 2 % annually.
Meanwhile, the Climate Action Network (CAN) is calling for a 2030 target of at least 40 % renewables or more. The proposal to amend the minimum renewable share specified in the RES Directive from 32 % to 40 % by 2030 will not be enough to reach the 1.5 °C goal, its press release said.