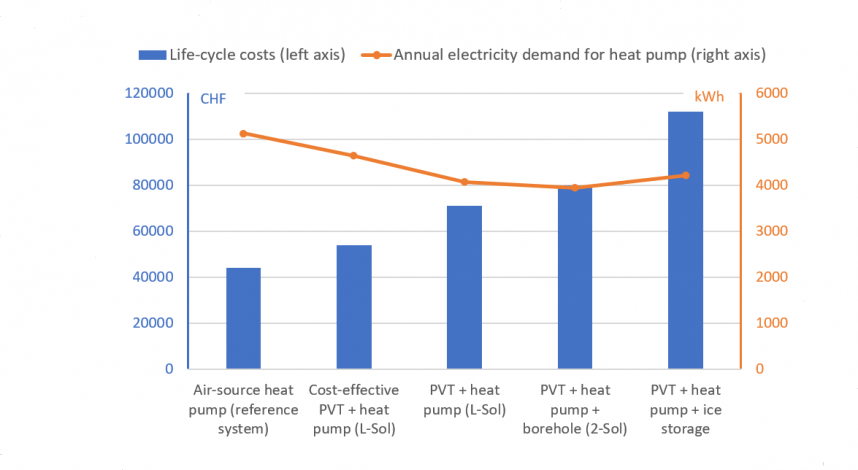 As a source of energy for brine heat pumps, a PV-thermal collector field is well suited to reducing power demand in existing and to-be-renovated single-family homes, researchers at the Zurich University of Applied Sciences, also known as ZHAW, have found. They compared combinations of PVT units and heat pumps with a system made up of an air-source heat pump and a PV generator, and have identified several options that could cut electricity consumption by about 20 % at nearly the same cost. The study’s findings were presented by the ZHAW’s David Sauter during an online symposium titled Solar Energy and Heat Pumps organised by the Swiss-based SPF -Institute for Solar Technology u.a. in late October.
Source: ZHAW
Some Swiss municipalities do not permit the operation of noisy equipment, for example, air-source heat pumps, outside buildings, and borehole drilling may not possible either. In this case, a rooftop PVT collector providing the heat pump with thermal and electrical energy is a suitable alternative. “We wanted to analyse whether a PVT collector as the only energy source for a heat pump installed in a single-family building is economically and environmentally feasible,” Sauter said about the aim of L-Sol, a two-year ZHAW project. The ZHAW research group’s simulations undertaken as part of the study were based on a to-be-renovated single-family home with 150 m2 of floor space, 67 kWh/m2 of annual heat demand, and space heating via radiators (in total 10 MWh/a).
The L-Sol system combines 30 m2 of non-covered PVT collectors, type Meyer Burger Hybrid 270/900, with a Vitocal 300-G heat pump. “In the simulations we considered a 1,000-litre ‘cold-water storage tank’ to the solar circuit and an electric element for backup energy, to make sure that the T-side of the PVT collector has enough juice to run the heat pump all year round,” explained Sauter. “Our simulations, however, showed that the electric element is only needed for a few hours in January and February.”
The first set of simulations illustrated in the chart above indicated that the L-Sol system used 21 % less electricity compared to an air-source heat pump. Still, it was difficult to cut down costs to the level of this type of installation. But compared to systems that  use borehole (2-Sol) or ice storage, L-Sol offers significantly reduced life-cycle costs, which come to about 11 % less than PVT plus borehole and 37 % less than PVT plus ice storage. 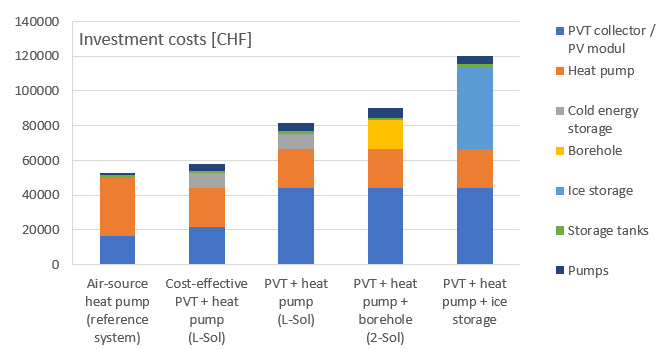 Breaking down the investment needed for four different types of heating systems used in single-family homes, assuming 15 MWh of heat demand annually. The chart on top shows results for a home with 10 MWh/a.
Source: ZHAW
“We found L-Sol’s main cost component to be the manufacture and installation of the PVT solar field, which accounted for 55 % of total system costs,” explained Sauter. Hence, the ZHAW group began to develop a cost-optimised L-Sol system with a smaller PVT area (20 m2) and typical PV modules, each upgraded with a heat exchanger on the back. The sort of clamp structure used for this retrofit makes gluing the aluminium heat exchanger to the module unnecessary – an important improvement, as clamping does not invalidate the warranty on the PV module. 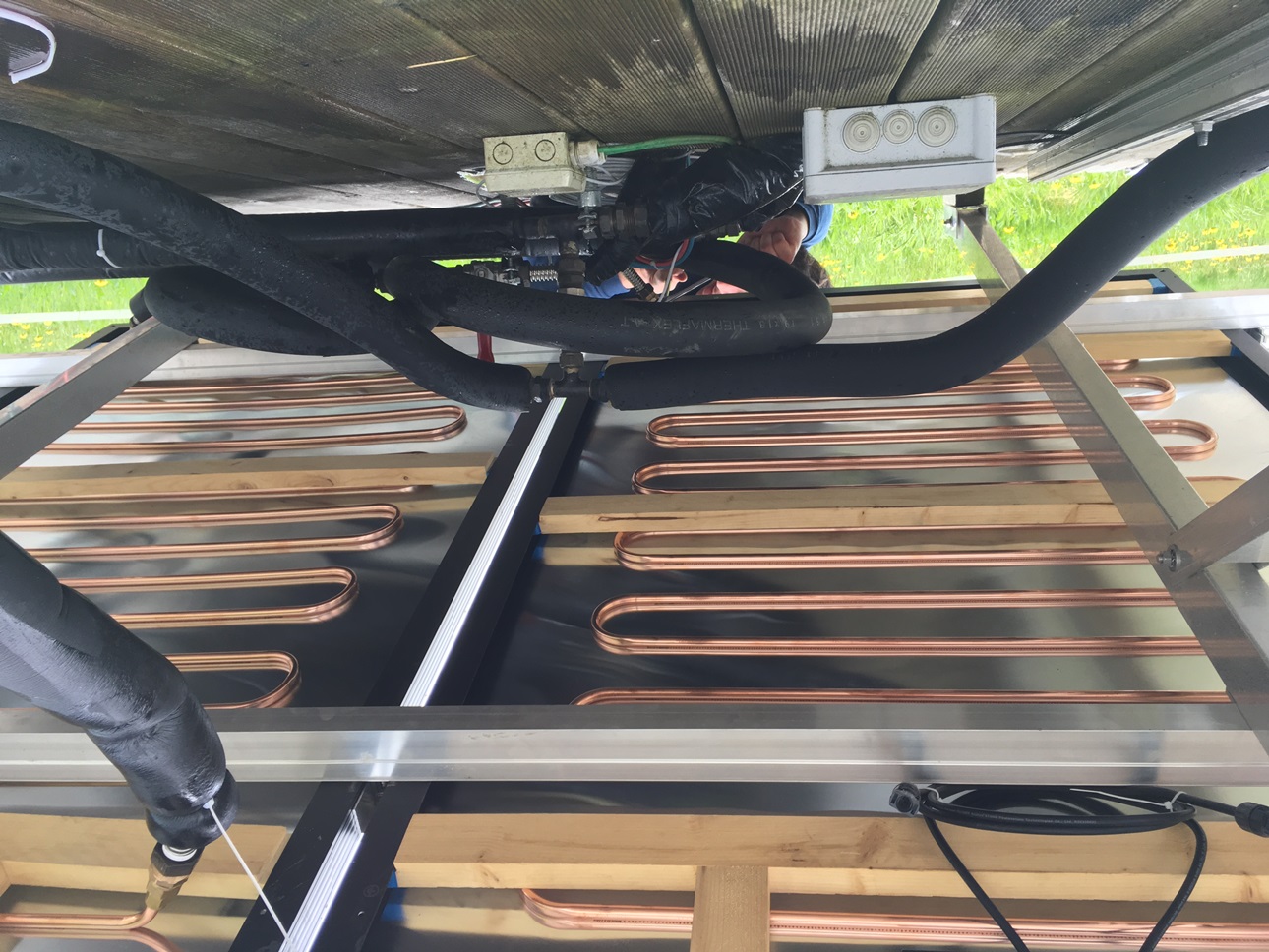 PVT panels with retrofitted heat exchanger on the back could cut costs by 45 % compared to market-ready PVT collectors concluded the ZHAW research group after building the first prototype PVT collector field.
Photo: ZHAW
The cost-optimised PVT collector produced 10 % to 17 % less heat than commercially available units, though simulations showed that electricity consumption of the heat pump in such systems throughout the year was only 4 % higher than that of a standard L-Sol system thanks to more operating hours. “We were able to prove during our simulations that total life-cycle costs over 20 years can be almost as low as for the air-water heat pump while the collector maintains its environmental advantage,” Sauter said. In addition to greater system efficiency, the main benefit of the L-Sol system over air-water heat pumps is the lack of noise emissions outside buildings. Furthermore, its installation does not require extensive groundworks or special permits. Therefore, it is just as suited to replacing fossil fuel heating in existing building stock.
Organisations mentioned in this article:
https://www.zhaw.ch/en/university/
https://www.spf.ch/index.php?id=17528&L=4
https://www.meyerburger.com/en/
News
Domestic Hot Water and Heating
Switzerland
Green Buildings
European Copper Institute
air source heat pumps
solar heat pump system
PVT systems
Zurich University of Applied Sciences
ZHAW