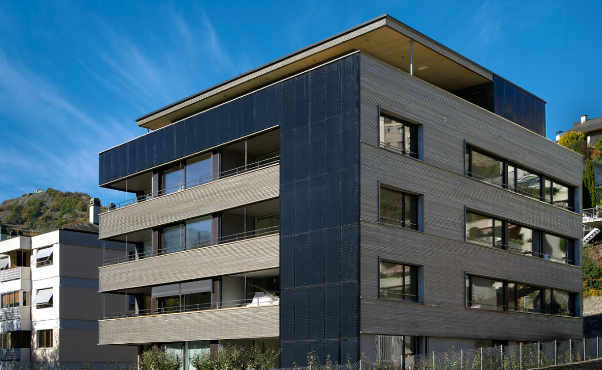 The merger of the two Swiss companies Energie Solaire and Soltop Schuppisser in October 2021 has created a multifaceted enterprise in the field of green building technology. The new company Soltop Energie chaired by Wolfgang Thiele has taken over all the employees, who have several decades of experiences in the solar sector. It now offers complex hybrid solutions including heat pumps with ice storage tanks and PV systems, all types of solar thermal collectors, as well as cooling and heating ceiling solutions. When asked what he associates with the merger, Thiele listed customer benefit, synergies, and trendsetting. The photo shows the Sakura House in Switzerland with a solar thermal façade using unglazed Energie Solaire collectors. The building won the Solar Prize 2021 from the Swiss Solar Agency.
Photo: Soltop Energie

“Through the merger, we have created a stronger and more efficient company with four Swiss sales and production sites and one German sales office”, stated Thiele. The main shareholders of the two companies founded Soltop Energie in October 2021. The division of the shares was carried out on the basis of the two companies’ valuations, taking care to ensure that the ratios were balanced, explained Thiele. In addition, 5 % of the shares have been offered to the employees of Soltop Energie, who provide one of the members of the Board of Directors.

What is the new status of the two former companies? Soltop Schuppisser is currently a real estate company that holds the properties at the site of Elgg. The name will be changed to avoid confusion with Soltop Energie. Energie Solaire also still exists, but is now only a holding company.

Thiele sees a small increase in demand for solar thermal systems in Switzerland this year. The cruel war in Ukraine and the resulting higher prices for fossil fuels are having a positive impact on sales. However, combinations of heat pumps and PV systems generally make more sense than residential solar thermal systems, he explained, because the latter always need to be combined with an additional heat source.

The new management team with the heads of both companies leads Soltop Energie
Photo taken from https://www.soltop-energie.ch/ueber-uns-team/

Many hybrid projects in the pipeline

According to Thiele the use of unglazed or PVT collectors as a source for brine heat pumps is very interesting: “The efficiency is similar to that of a brine heat pump with a borehole. This system can be used very well in urban areas where drilling is not possible and air/water heat pumps cannot be used.” Such hybrid systems can be combined very well with ice storage tanks and any kind of heat recovery via a cold district heating grid in residential neighbourhoods. “We have many projects of this type in the pipeline at the moment. One of them is a new district with 11 apartment buildings in Geneva,” added Thiele.

Decades of experience in the solar sector

Energie Solaire has existed since 1973 and its unique product is an unglazed solar collector consisting of two thin stainless steel plates that are welded together and form a direct-flow absorber surface. The so-called AS absorbers are particularly suitable for in-roof and façade installations.

Another application of these metal absorbers is PVT collectors. Energie Solaire started a joint-venture with the Swiss company PVT Solar two years ago. PVT Solar sources a special type of stainless steel absorber as the thermal side for its PVT panels, which works very well, according to Thiele: “At most sites we use the Consolars’ PVT collector Solink in combination with heat pumps for our larger projects, due to the fact that this one has a larger heat exchanger surface on the back side of the PV-panel.” 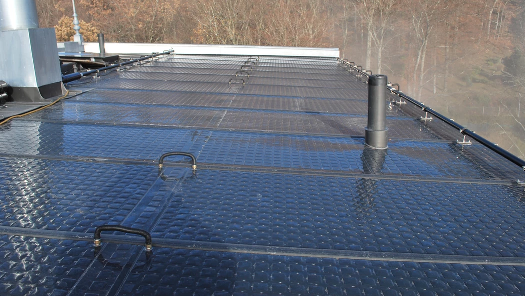 Solar roof made with AS absorbers that provide hot water for a Swiss hotel neat Lake Geneva
Photo: Soltop Energie

Soltop Schuppisser was founded in 1994 and has produced solar thermal collectors over more than two decades. Due to the shrinking solar thermal market, the enterprise diversified its portfolio to include heat pumps and PV systems over the years.