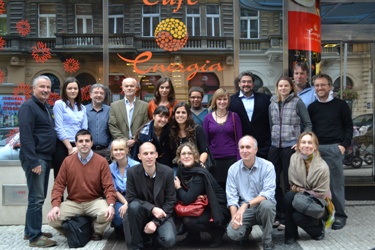 The next edition of the European Solar Days – a campaign of national events aimed at promoting the use of solar energy – will be held from 1 to 13 May 2012. The initiative now includes more than 20 participants from 16 countries, who gathered on 7 and 8 November in Prague for the second European Solar Days Annual Conference. The meeting consisted of the internal project meeting with the partners and the Annual Conference, also attended by two guest countries. A total of 23 conference participants were responsible for evaluating the 2011 event and planning the 2012 campaign.
Photo: ESTIF

Already for the 5th time, the European Solar Days will promote the use of the sun to generate electricity, as well as heating and cooling. The organisation of annual “Solar Day” events on a national level is hoped to raise public awareness about intelligent energy solutions and behaviour, particularly in case of solar thermal and photovoltaics. During the 4th edition, which was held from 1 to 15 May 2011, the increasing support for solar energy was demonstrated by the more than 8,000 events organised in 19 countries throughout Europe, which together attracted about half a million people.

The European Solar Days Annual Conference is the main event for representatives of the network countries to assess the campaign’s results. It is also an opportunity to exchange views on how to broaden the network and spark the enthusiasm of event organisers and participants alike. “The European Solar Days face a great challenge today, as participants and event organisers increase their expectations and demand more from the organisations in charge of the campaign,” says Riccardo Battisti, the coordinator of the European Solar Days in Italy since the first edition in 2008 and responsible for implementing the 2012 campaign.

Representatives from Sweden and the Ukraine attended the conference as guests, because these countries will organise Solar Days events in 2012 and have already done so in the past. “The European Solar Days thrive on the commitment of individuals, organisations, companies and public institutions all across Europe. They combine efforts to make one’s fellow European citizens aware of the potential of solar energy. It is a proven formula, which can be duplicated and adopted throughout different countries,” says Pedro Dias, Coordinator of the European Solar Days.

The 5th edition of the Europe-wide campaign will then be organised by the European Solar Thermal Industry Federation (ESTIF), together with the European Photovoltaic Industry Association (EPIA) and a network of affiliated organisations, including NGOs, businesses and local governments. In addition, the European Solar Days project will also be supported again by the European Commission’s Intelligent Energy Europe (IEE) programme.