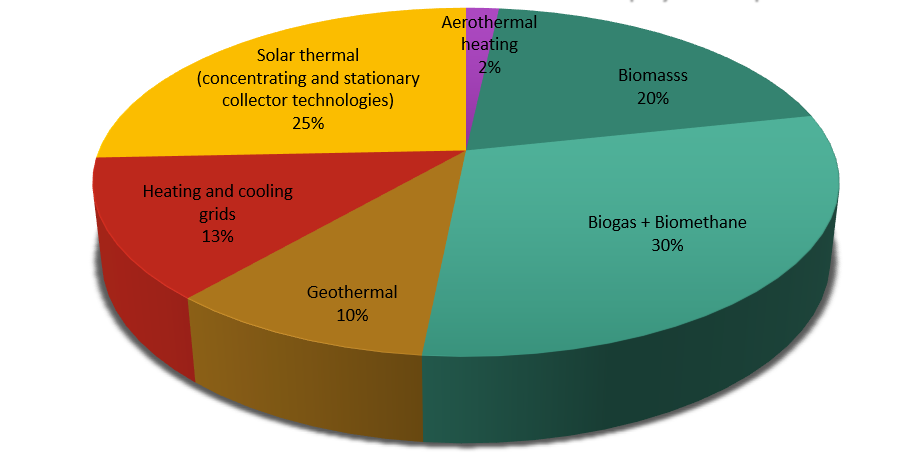 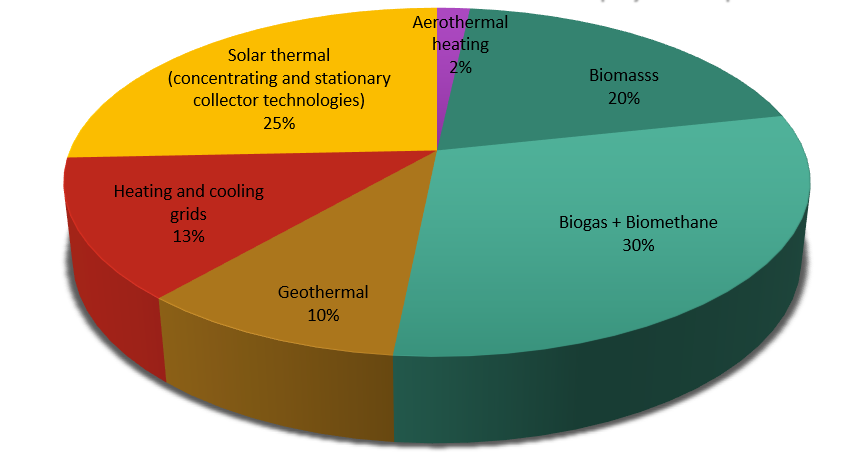 The first call for renewable heat projects for the industry and service sectors in Spain resulted in awarded grants of EUR 108 million. This budget will be used to support 51 solar heat projects totalling 62 MW. Within this funding line Thermal Energy Production beneficiaries receive non-repayable grants co-financed by the European Regional Development Fund (ERDF). Concentrated solar technologies will be used for about two thirds of the total approved solar capacity. Some targeted regions, however, did not receive sufficient applications and over a 20 % of the budget will be returned to the EU. For 2022 the Spanish administration plans a call for solar heat investment grants financed by the Next Generation EU fund, the economic recovery package to support member states adversely impacted by the COVID-19 pandemic. This article is followed by a news piece summarizing market participants’ opinions about the subsidy scheme.
Source: Institute for Energy Diversification and Saving – IDAE

The Spanish government already approved the subsidy scheme Thermal Energy Production in August 2020 with the aim of supporting renewable energy projects with low and medium-temperature heat in the industry and service sectors. The administrator of the subsidy scheme, the Spanish Institute for Energy Diversification and Saving – IDAE, assigned an individual budget to each region. The regions then launched the calls to submit projects in the second half of 2020. The approval phase then took almost a year, so that the last projects received their confirmation only in January 2022. Eligible technologies were solar thermal, PV with heat pumps, geothermal, biomass, biogas and biomethane, as well as cooling and heat networks. The pie chart above shows the distribution of the EUR 108 million in subsidies among the different technologies.

Highest demand in Andalusia and Madrid

In total, EUR 136 million were available for the 13 regions of Spain. EUR 108 million were finally awarded. The remaining 21 % (EUR 28 million) will be refunded to the EU budget. This shortfall was created by some regions only receiving a small number of projects. In Asturias, for example, a region that had an available budget of EUR 3 million, only one project with 384 kW was submitted with an awarded grant of EUR 138,297. And in Cantabria the only submitted project was rejected.

According to the IDAE: “The remaining EUR 28 million belonged to the 2014-2020 period. Now we are working on the ERDF 2021-2027 package, so no new calls are expected to be launched using the remaining budget.”

Nevertheless, the IDAE is satisfied with the results of the first round of regional calls as a considerable proportion of the budget was awarded. “Although the total budget has not been utilised, there has been significant promotion of the different technologies and applications in various sectors. The text call within the European Next Generation EU fund will offer again funding for such innovative solutions,” said Claudia Ortega from IDAE’s Communication Department.

The main winner from this first call has undoubtedly been concentrated solar technologies. They will be used in 23 projects totalling 42.6 MW and receive EUR 19.1 million of subsidies (see following table). The largest share of this capacity comes from one awarded project with 30 MW. The project developer Engie Servicios Energéticos submitted this proposal, which will receive around EUR 13.4 million. According to undisclosed sources from the sector, Engie will install this plant for a well-known beer brewery in Seville.

The remaining CST projects will focus on the chemical industry (3 projects) and miscellaneous agribusinesses such as farms, meat processing, dairy and cheese manufacturers, complemented by several projects for the service sector. 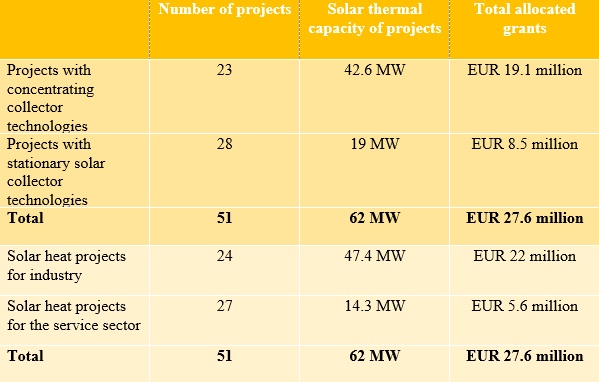 Among the 51 solar heat projects which will receive funding, concentrating collector technologies for industry will receive the lion’s share because of a 30 MW plant submitted by Engie. Source: IDAE and own investigations

The company Vitalia Activos SL is among the beneficiaries for stationary collector fields. It received approvals for grants for 11 of its retirement homes. Furthermore, L. Pernia received two grant approvals for its factories in Andalucía and Madrid with a total of 7 MW. The company manufactures using by-products of the brewing industry. The remaining grants for conventional solar thermal projects went to sport centres, public buildings or hotels.