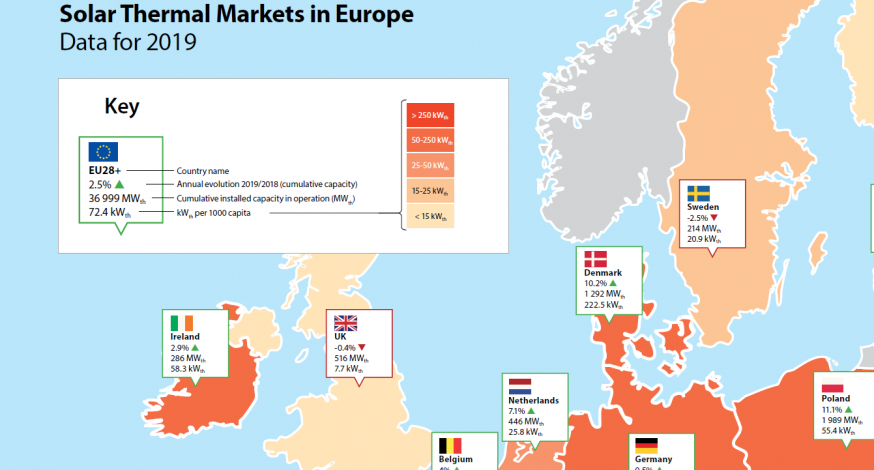 Europe’s solar heating and cooling markets keep growing, Brussels-based Solar Heat Europe said in a 21 December press release. At the end of 2019, about 10.4 million solar thermal systems totalling 37 GWth of capacity were in operation across the European Union and Switzerland, 3 % more than a year earlier. The industry also generated a combined turnover of EUR 1.96 billion and employed about 20,000 people full time. A detailed analysis of how Europe’s markets fared in 2019 is part of a six-page Solar Heat Europe brochure, available for download at http://solarheateurope.eu/publications/market-statistics/solar-heat-mark...
Annual capacity additions in the EU’s two countries leading in solar thermal installations – Germany (358 MWth) and Greece (253 MWth) – converged in 2019 because of opposing national trends. The German market continued its decade-long decline and was down 11 %, whereas additions in Greece grew by 10 % for the fifth consecutive year thanks to cost-competitive products, a minimum 60 % solar hot water requirement for new buildings, and the Household Energy Savings programme. However, in a surprise reversal, preliminary data indicates that Germany made substantial gains in 2020.
The top spots in 2019 were taken by Denmark, where capacity jumped by 174 %, the Netherlands, where the market grew by 72 %, and Cyprus, where growth came to 24 % overall.
Denmark again benefited from a large number of new solar district heating systems. In all, it saw 10 fields built and 5 expanded, bringing the total to 134 MWth installed in 2019. The strong showing was partly the result of a good business environment, including high taxes on fossil fuels, enough land for cost-effective, ground-mounted solar fields, and cheap finance options for the non-profit, user-owned utilities running the country’s district heating networks.
Capacity additions in the Netherlands grew from 29 MWth in 2018 to 49 MWth in 2019, stimulated by a broad public discussion about phasing out natural gas. Both sales for small-scale and roof-mounted solar thermal systems have risen since 2016 thanks to the national government’s Sustainable Energy Investment Subsidy (ISDE) programme. And the SDE+ scheme aimed at multi-megawatt installations led to the commissioning of yet another 13 large solar thermal systems totalling 23 MWth, a 38 % increase compared to the previous year.
Cyprus also had double-digit growth rates in 2019. Collector area additions on the island increased by 24 % in 2019 after growing by 5 % in 2018. The increase in capacity came as a result of an overall good economy and the grants offered by the government for residential solar thermal systems. 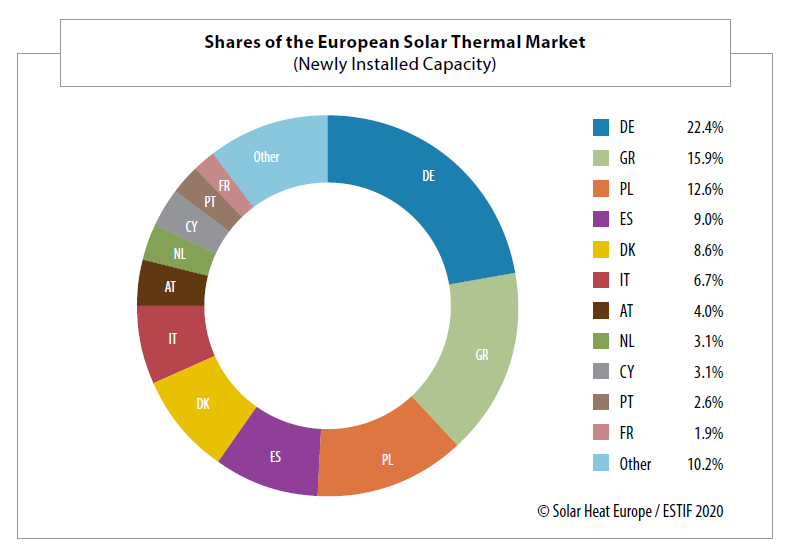