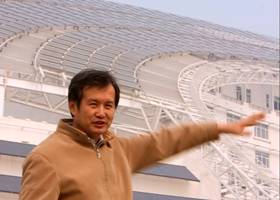 At the end of September 2011, the founder and President of Himin Solar Energy, one of the largest solar thermal manufacturers in China was honoured with the Right Livelihood Award. The Swedish Right Livelihood Award Foundation praised Huang Ming “for his outstanding success in the development and mass-deployment of cutting-edge technologies for harnessing solar energy”. According to the International Energy Agency’s Solar Heating and Cooling Programme (IEA SHC), this is the first time a Right Livelihood Award goes to China. The photo shows Ming presenting the huge solar installation above the roof of International Exhibition Centre in Dezhou, Shandong province, which hosted the 4th International Solar Cities Congress in September 2010.
Photo: Sven Tetzlaff

IEA SHC congratulated Ming on his great honour in a press release from 30 September. “Huang Ming really deserves this award,” says IEA SHC chairman Werner Weiss. “He has been a driver of solar heating and cooling in China and abroad.”

The 53-year old prize winner is a passionate and visionary entrepreneur and change-maker in the field of solar thermal energy. In 1995, Ming founded vacuum tube collector manufacturer Himin – a company which has since then grown into one of the biggest manufacturers in China. Thirteen years later, he began setting up the Solar Valley in Dezhou as a national and global example of how to integrate solar energy systems into all types of buildings and make use of it in all sorts of application areas. Today, the Solar Valley accommodates several highly automated solar thermal factories, which cover all of the production steps,, from raw glass tubing to complete solar thermal systems. Other buildings in the valley include an office and a hotel complex, a solar university, a sports and entertainment complex, parks and apartments. Every day, thousands come to visit the area.

Ming started his carrier as an engineer at the Petroleum Research Institute of Dezhou, the Right Livelihood Foundation states on its website. “After the birth of his daughter, he became worried about the polluted environment in which their child and other children were living. He then began working secretly in the solar energy field, without quitting his job at the institute, because he needed to fund his initial solar research by his salary”. He is quoted with the following vision: "I have a dream, a common dream of the people devoted to renewable energy sources around the world: that for the blue sky and white clouds of later generations, qualified products will be used to realise renewable energy substitution.”