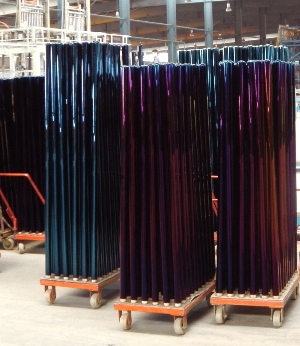 Whoever is purchasing vacuum tube collectors from China these days can certainly not complain about getting contradictory information: There are those suppliers which are already charging their clients 17 % more for vacuum tubes because of altered export taxation, whereas others sell their vacuum tubes at the same price as they did in the past. The notable price differences result from a decision by some Chinese provinces to change their HS code for vacuum tubes. The tubes used to be under HS code 84199010, as a part of solar water heaters, and as such, they were exempt from export duty. For example, the authority in Zhejiang province changed the classification to HS code 7020009990 for glassware, which stipulates a 17 % export duty.
Photo: Bärbel Epp
This is what happened to vacuum tube manufacturer Baoguang Solar Energy, located in Haining in Zhejiang province, whose containers were blocked at Shanghai’s port in August this year because the company used the old HS codes. “Customs stopped the container and said solar tube products could no longer be exported as a solar water heater component but only as glass with HS code 7020009990,” Sales Manager Edwin Ma explained in October, when the company was still negotiating with the customs. “We’ve been exporting our products under HS code 84199010 for more than 10 years and have never encountered such problems before.”
Large manufacturers still exempt from export duty
What is so confusing about the situation: The Port of Qingdao, further north in Shandong province, still accepts vacuum tubes as solar water heater components, so shipments leaving this port are still exempt from export duties. Several well-known companies, such as Sunrain, Himin, Sangle and Linuo New Materials, produce in Shandong province. A representative from one of the large manufacturers, who does not want to be named, confirmed that there has not yet been export duty on his company’s products. “The solar industry is very important for China, so the government has some method to protect companies with good-quality products,” he argued. Meanwhile, Edwin Ma has noticed that many clients have already moved to Shandong province in order to purchase tubes, and he found it really “inconceivable that there are different customs regulations in one and the same country.”
The Indian industry already discussed the price hikes for Chinese vacuum tubes during the Renewable Energy India (REI) Expo 2014, which took place at the beginning of September. Because the new HS code for glass in India adds another 12.85 % levy charged by the Indian customs office, the price of imported vacuum tubes increases by just around 30 % in total. Another interesting fact is that complete solar systems are still exempt from both the Chinese export and the Indian import duty. This could very well be the objective of the new Chinese policy: Convince international clients to buy complete systems instead of only one component.