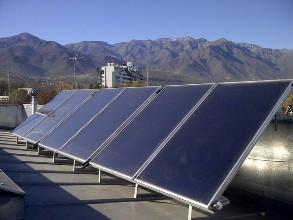 2010’s “Law 20.365” tax rebate has made Chile´s solar thermal market grow substantially over the last years. Until now, however, the government has not yet agreed on continuing the rebate after 2013. The law enables construction companies to deduct a certain share of their investment costs in a solar thermal system (including installation) from the down payments that the law requires on any tax declaration. Chile’s solar industry association ACESOL is lobbying to extend the tax rebate scheme, because the country´s solar thermal industry has already been affected: As the law applies to large-scale construction projects, which take a long time to plan and build, several developers have just decided to exclude solar water heaters from their construction projects.
Photo: Schüco International KG

So far, the tax rebates have been Chile´s most successful incentive programme for solar water heaters. According to a report published by the Energy Ministry and the agency Dandilion in September 2012, there were 28,000 m² of solar collectors installed in Chile by the end of 2009.

“More than 10,000 m² were installed within only two years,” Christian Antunovic, President of ACESOL, writes in an opinion piece on the organisation´s homepage. According to Acesol, until June 2012, homeowners installed systems that serve 7,500 flats in multi-family buildings and 2,700 systems in single-family houses, according to ACESOL. The report published by the ministry states that 8,817 m2 were financed through tax rebates in 2010 and 2011. Based on the number of sold collectors and systems which are waiting to be installed, ACESOL estimates that the tax rebates will have led to new installations that serve 30,000 flats before they may end in 2013.

It took quite some time after enacting the law to implement all relevant specifications. “All efforts put into the programme would be lost if the law was not extended. Also, the delay in the original norms has made the law not start to affect the market before late 2010 or early 2011,” says Antunovic. From that time on, it took another 12 to 18 months until the systems were actually built, which meant not before 2012.

Altogether, ACESOL says that 25,000 users will benefit from the new systems. The importance of this statement will become clear to customers if they take into account that according to a study carried out in 2002, 47 % of the houses in Chile did not have any domestic water heating system. ACESOL adds that compared to conventional water heaters, the systems save up to Chilean Peso (CLP) 176,000 (around USD 370) per year and family – a lot of money in a country with great income inequality, such as Chile. The common traditional waters heaters use gas or liquefied gas.

According to ACESOL, extending the tax rebate for another five years will be enough to create a natural market for solar thermal systems in Chile, which could go on without subsidies. Projections based on the latest grow rate suggest that in 2020, 40 % of all newly built houses could be equipped with solar water heaters.

For more information about the tax rebate scheme, please see the database of incentive programmes.