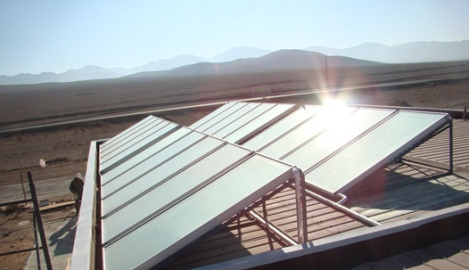 Two years after the end of the tax credit scheme that was part of law 20.365, the Chilean parliament approved an extension of the support programme for solar thermal systems. Although it is good news for domestic solar system suppliers and installers, the approval process for the new incentive took one year longer than expected and many local companies are in critical condition after a prolonged downturn in the industry’s economic activity.
Photo: Britec
In October 2014, the then newly elected Michelle Bachelet government agreed on an extension of law 20.365 as well as on the allocation of USD 45 million to the tax scheme, and the approval of the final version was expected by the beginning of 2015. The Chilean solar thermal industry, however, had to be patient for another year. The parliament finally approved the bill in January 2016 and the binding version entered into force on 5 February 2016. The credit scheme targets construction companies which set up residential units costing between UF 1,000 and 2,500 (between EUR 33,700 and EUR 84,250). Individuals cannot apply for this incentive.
Progressively reduced tax credit amounts
The amended version published under number 20.897 establishes a tax support scheme for solar thermal installations in single-family housing units, granting between UF 26.5 (EUR 873) and UF 33 (EUR 1,087) during the first year based on the overall value of the unit (see the attached document). This amount refers to the maximum amount of solar thermal investment that the construction company can offset as part of its next year’s tax declaration. UF is a unit of account which has been used in Chile since 1967. The exchange rate between the UF and the Chilean Peso is constantly adjusted for inflation, so that UF values remain stable. In 2017, the tax credit cap will be reduced to between UF 22.5 and 28. In the years that follow, the incentive will decrease progressively until it will reach between UF 6.4 and 8 in 2020.
According to the now approved law number 20.897, the Chilean Ministry of Housing and Urban Planning will directly manage an additional budget of USD 45 million, which will be reserved for low-income families still unable to gain access to water heating. The amount is intended for social housing developers and constructors offering this type of housing. According to Andrés Bogolasky, President of the solar industry association ACESOL, there are no specific incentives for social housing at present: “The government still has to develop a regulation to implement this subsidy and our latest information is that this regulation hasn’t even been drafted yet. The only available subsidy to date is the USD 45 million for the first modality.”
One-year extension for tax credit scheme
One of the positive news about the approved law is the fact that it is retroactive, meaning all those housing projects finalised between January 2015 and February 2016 will be eligible for the tax credits as well. According to Bogolasky, this is an advantage, albeit with limited effect – as “most of the developers did not invest in solar systems last year because of the high uncertainty about the now approved law.” An undoubtedly positive outcome of the negotiations between ACESOL and the government has been the one-year extension of the tax credit scheme. “Initially, the new rules were due to last until 2019, but because of the delays we managed to extend their applicability by one more year,” explains Bogolasky. The ACESOL president expects between 8,000 and 9,000 new systems to be installed annually over the first three years thanks to the new legislation.
The former law 20.365 between 2009 and 2013 led to some 43,000 houses being retrofitted with solar thermal systems, according to the association.
The new bill also includes a novelty not present in the previous version, namely the obligation for the beneficiary to sign a maintenance contract over a period of five years.
Too late for several market players
Generally speaking, ACESOL believes that the law is a positive sign, although the association is working on having the government make further commitments to establish a long-term, stable market.
The new rules do establish a relatively stable framework for the next 5 years, but the two-year delay of their approval has seriously ravaged the market. According to Javier Ferrada, Sales Manager from solar thermal system supplier and installer Britec, the law has come too late: “Over the last two years, maybe 90% of the companies active in solar thermal have gone out of business. We have survived thanks to some other business fields like gas heating systems”. Britec used to manufacture its own solar collectors, but management decided two years ago to halt production and import all of the equipment. “We expect the new incentive to reactivate the market, but only over the first two years, in 2016 and 2017. After that, the incentive will be too low. We don’t expect a sustainable market in the medium or long term,” says Ferrada.
Good starting point but many flaws
According to Jorge Bobadilla, Managing Director of solar thermal installer Solsur, the incentive is a good starting point but exhibits many flaws: “Individuals should have been considered as beneficiaries of the incentive, not only construction companies. Besides, we believe that this tax incentive is not sustainable over the long term; it would be much better to approve an obligation to use solar thermal energy in all new public or social housing buildings,” he believes.
Website of the association and the companies mentioned in the article:
http://www.acesol.cl
http://www.britec.cl/
http://www.solsur.cl
https://solarthermalworld.org/wp-content/uploads/2016/03/ley-20897_05-feb-2016_1.pdf