Skip to main content
Sign up for newsletter
Follow us
Advanced search
To have a solar thermal system on the roof of one’s home may be a good thing if it does work well. But the probability that solar water heaters perform as they should and as long as they are supposed to is higher when they are installed by real experts familiar with the best practices of the industry. But how is one to know whether an installer is a real professional? Certification may be a viable indicator of whether or not a plumber can be trusted with installing a modern solar thermal system. That is why certification is gaining importance not only in manufacturing, but also in other parts of the industry.
“Since we began in 2004 to certify based on EN ISO/IEC 17024, more than 850 solar thermal energy planners and installers have participated in our training courses and several of them became certified professionals,” Dr Gundula Weber, expert at Austrian Institute of Technology (AIT), says. AIT is an accredited certification agency in Vienna and offers eight-day courses during which the participants will not only be educated in the planning and installing of solar thermal systems, but will also learn about current trends in solar thermal technology. After having finished the course successfully, planners can submit their applications for certification, along with three reference projects of more than 12 m² of collector area each. AIT issues the certificates with the title Certified Solar Thermal Energy Installer and Planner. Its website lists a total of 16 certified Austrian installers (see the attached PDF).
In Austria, solar thermal energy planners or installers are under no obligation to become certified professionals, but Weber sees a clear marketing advantage in the certification. “It engenders trust among consumers and ensures that the professional is skilled enough to plan, construct or install technically perfect and good working systems,” Weber says. AIT certifies solar thermal energy experts as well as photovoltaic and heat pump professionals. Every certificate is valid for three years. 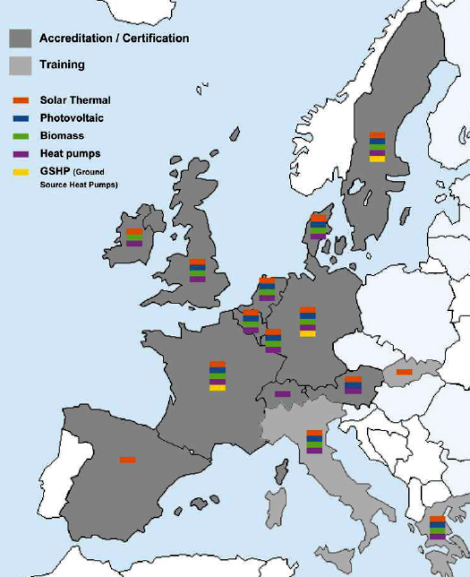 Existing accreditation and certification schemes in Europe within the QualiCert project as of 2011
Source: QualiCert report (attached)
All 28 EU member states have quite different legal requirements and certification systems. A few years ago, AIT participated as a partner in the European research project QualiCert - Quality certification & accreditation for installers of small-scale renewable energy systems. Its aim was to compare the different national requirements and identify best practices in Europe. No later than 2012, QualiCert came to an end. The most current summary produced by it was a report bearing the program’s name and based on figures from 2011 - before the deadline at the end of December 2012, until which Article 14.3 of the Renewable Energy Directive 2009/28/EC had stipulated the implementation of training courses for installers of solar water heaters in all EU member states.
Although, in general, certificates are only issued by accredited institutions, training courses can also be carried out by manufacturers of solar thermal systems. “We train solar thermal energy installers in compliance with the EU renewable energy directive,” says Alfréd Gottas, Managing Director of Thermosolar in Bratislava, the Slovak subsidiary of German solar collector producer Thermosolar. “The installers trained by us will be certified by a state commission,” he explains. QualiCert had already recommended that manufacturers or distributers provide training under one condition: It should be done “brand-neutral”, so that “installers shall be capable to install products of different brands”.
In April 2015, Dutch CE Delft published its Mid-term evaluation of the Renewable Energy Directive, which had been prepared on behalf of the European Commission’s DG Energy department (see the attached document). The statements in it concerning Article 14, Information, Certification, Training, make clear there is still a lot to be done, as not all EU member states have implemented installer qualification schemes. The authors of the study also note that “no data are available on the status of the implementation across Member States as of 31 December 2012 or after“. Furthermore, there is the problem of whether countries are willing to mutually recognise each other’s certificates. CE Delft´s evaluation report recommends “the introduction of a standardised test for all European installers as part of national certification or qualification”.
Solar thermal certification by the Austrian Institute of Technology (AIT)
Websites of companies, institutions and projects mentioned in the article:
Thermosolar: www.thermosolar.sk
AIT – Austrian Institute of Technology: www.ait.ac.at
QualiCert: https://ec.europa.eu/energy/intelligent/projects/en/projects/qualicert
CE Delft: http://www.ce.nl/
Frank Stier is a Sofia-based freelance journalist working for print and online media as well as news agencies: www.socb.de