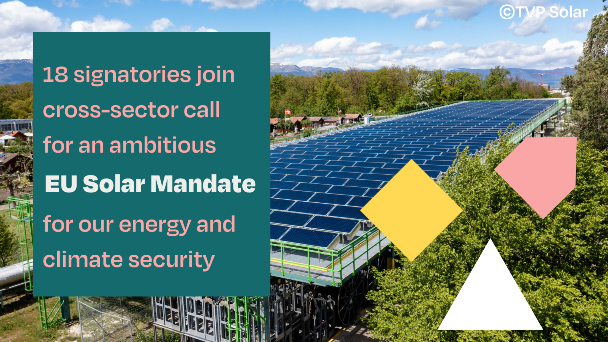 In a joint letter, 18 organisations from diverse sectors of the economy have called on EU Energy Ministers and the European Parliament to support an ambitious EU solar mandate. Among the signatories are the Brussels-based associations Solar Heat Europe and the European Copper Institute. The joint letter advocates a strong mandate for on-site solar usage in the amended Energy Performance of Buildings Directive (EPBD) on the basis of the proposal put forward by the European Commission. It calls for a solar regulation not only for new buildings but also for buildings undergoing major renovations and for an improved regulatory framework that supports consumer access to solar building solutions. You can find the joint letter below, for download. Chart: Solar Heat Europe

The background of the joint letter: In May 2022, the European Commission proposed an EU Solar Rooftop Initiative as part of REPowerEU plans to reduce dependency on fossil gas across the continent. To maximise the potential of the initiative the organisations have grouped together to call for a solar mandate to be implemented in the EPBD. The mandatory regulations should be extended to “buildings undergoing major renovations which look at the whole envelope and when a roof renovation occurs. (..) While maintaining the ambition on residential buildings, the mandate should apply to all non-residential buildings as well as relevant infrastructure such as carports”, says the letter.

The signatories underline that a powerful mandate for buildings will incentivise consumers and the construction industry to undertake integrated extensive renovations. “To achieve zero-emission buildings, the solar mandate must accelerate deployment in combination with energy efficiency improvements and upgrade of technical building systems such as electrical installations, heat pumps and storage systems”, commented Quentin de Hults, Director Green & Healthy Buildings at the European Copper Institute.

The letter also emphasises that the “right frameworks must be set up to ensure the availability of sufficient numbers of professionals with the right skills for the decarbonisation and smart electrification of the building stock, including solar installations.” According to the press release, solar thermal will generate 250,000 jobs by 2030, while under an EU 45 % renewable target for Europe, solar PV will need 880,000 by the same year.

The drafting of the joint letter was coordinated by Jan Osenberg, Policy Advisor of Solar Power Europe. The associations shared their statement with members of parliament and permanent representatives to the EU and proposed personal meetings with them to discuss the topic further. In addition, every week a different signatory organization will publish a social media post.