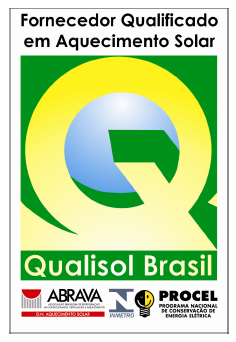 The Brazilian installer label Qualisol has recently gained greater visibility in the market. Not only does CAIXA, the national mortgage bank for the housing sector, now require installers to provide a Qualisol label to take part in the social housing programme My Home My Life (Minha Casa Minha Vida), but also some of the energy utilities’ efficiency programmes accept only installers which are Qualisol certified.

Both measures have contributed to the increasing importance of the Qualisol label on the market. Regarding the former, it looks as if the government will mandate solar water heaters for the My Home My Life programme at the beginning of next year. This means that by 2014, two million low-income families are going to have a thermosiphon system on the roof of their home. Concerning the energy utilities: They are obliged to spend 0.5 % of their revenues for electricity-saving measures, and solar water heating turns out to be a popular solution. Hence, considerably more installers are now Qualisol certified – which finally puts an end to the label’s steadily low certification numbers since its May 2005 implementation.

In the beginning, the label simply did not succeed as planned by its initiators, the government and the Brazilian industry association Abrava. Only around 120 of an estimated 2,000 solar installers and plumbers in the country registered with Qualisol. It requires signing a contract in which the installer agrees to sell and install only solar products certified by the National Institute of Metrology, Standardization and Industrial Quality (INMETRO). This concept did not become attractive enough, because:

It is important to note that the solar bye-laws adapted in Brazil´s cities all mandate the use of collectors which are labelled by INMETRO. With some adjustments, all market indicators point to strengthen the Qualisol programme in the coming years.

My Home My Life programmeQualisol