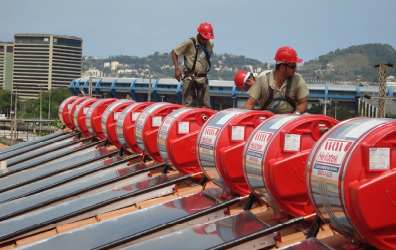 The cooperation project between the German Agency for International Cooperation (GIZ) and the federal housing bank CAIXA bears first fruits. A multi-family house in the Brazilian city of Rio de Janeiro with 496 units was equipped with one thermosiphon system each. This installation serves as a showcase for this kind of technology, as it is the first in Rio de Janeiro which uses gas instead of electricity as an auxiliary heating source.
Photo: GIZ

The newly constructed multi-family houses are destined for low-income families. Each solar water heating unit consists of 2 flat plate collectors and one thermal storage tank of 200 litres, which is enough to meet the heating demand of a family of five. Brazilian engineering bureau Studio Equinócio was commissioned by the GIZ to design and engineer the project. The systems were supplied and installed by Heliotek, a Brazilian collector and tank manufacturer, which belongs to the international Monier Group.

Showcase of solar thermal technology: The newly constructed multi-family houses for low-income families are the first of their kind in Rio de Janeiro.
Photo: GIZ

The project in Rio de Janeiro was developed as part of the 1,000-roof programme between CAIXA and GIZ. The three-year cooperation began in 2009, aimed at a transfer of technological know-how concerning the design and installation of solar water heaters financed by CAIXA. The Brazilian development bank plays an important role in the social housing programme My Home My Life.

This text was written by Carlos Faria Café, Director of SE-Studio Equinócio – Marca Solar Group based in Brazil.