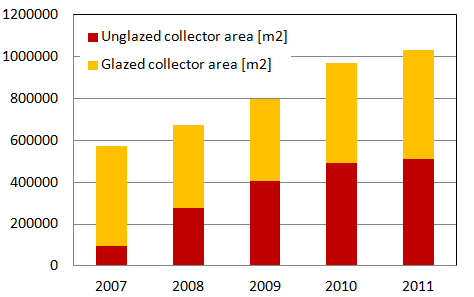 For the first time, the newly installed collector area in Brazil has surpassed the one million mark. 1,029,616 m2 were newly set up in 2011 – 7 % more than in 2010. The chart shows that it was mainly due to the solar swimming pool segment with unglazed collectors that market volume has grown so rapidly over the past few years. Last year, however, indicated a shift in sales: Although only half of the newly installed collector area in 2011 could be attributed to glazed collectors (according to the statistics of DASOL, the Solar Heating Department of the association ABRAVA), the glazed segment (+9%) grew faster than the unglazed segment (+4%) for the first time since the association has published separate figures for unglazed and glazed swimming pools.
Source: DASOL/ABRAVA

When looking at the results of each quarter, it becomes evident that the market started slow in 2011 because of the elections of a new government (see the attached report for more results). There was also a delay in revising the law which mandates solar water heaters in the national housing programme “My home my life” (Minha Casa Minha Vida). The new technical requirements were published late last year, on 27 September. This delay – and the heavy rainfalls in the first quarter of 2011 – slowed down market development in the first half of 2011. The following table shows that one-third of the glazed collector area was installed just during the last three months of the year.

The DASOL/ABRAVA market report additionally shows the share of the different segments in the total newly installed collector area (glazed and unglazed). 20 % of the market volume can already be attributed to the social housing programme. Another 23 % are commercial installations in the industry or businesses. With 57 %, the residential sector is still the dominant force because of strong demand for solar heating of private swimming pools.

Last but not least, the annual market report pictures the regional distribution of collector sales. The southeast region (blue in the maps below) – with the big cities of Rio de Janeiro and Sao Paulo – still accounts for more than 70% of the market volume. The two maps below illustrate the difference between the first half of 2011 (left) and the second half of 2011 (right). The centre-east region (light yellow) gained significant momentum during 2011, from 7 to 14 %. The southernmost region (red) remained about stable, whereas the region in the north (green) and the northeast (orange) were growing, albeit starting from a low level. Regional distribution: The map on the left shows the share of each region in the sales figures of the first half of 2011. The map on the right illustrates the regional distribution in the second half of 2011.

The market report is based on a survey among the members of DASOL/ABRAVA carried out in February 2012. Figures of members not willing to share their sales data or of non-affiliated companies were extrapolated by the association´s statistics department, so that the results could reflect the entire Brazilian market.