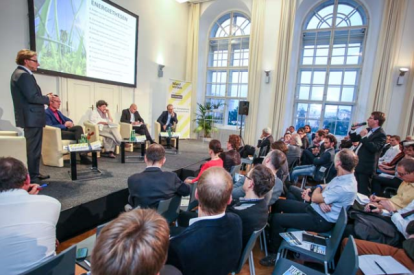 By 2050, Austria’s capital Vienna wants to cover half of its heat demand by solar thermal energy, it says in the Seven Energy Assumptions (Sieben Energiethesen) presentation, which was held by Bernd Vogl at the beginning of October. The photo shows the panel discussion during which Vogl, who is Head of the city’s Department for Energy Planning, MA 20, presented his assumptions (see the attached presentation in German) at a side event at the evening before the Fachkongress Energie-Architektur 2014 took place in Vienna.
Photo: Christian Fürthner, MA 20
The city of Vienna is about to complete its solar guidelines, which will encompass solar thermal and photovoltaic technology, as well as building vegetation. “Those guidelines will be used as a basis for urban development and influence building codes and incentive policies,” says Klaus Mischensky, the new Managing Director of the solar association Austria Solar. Since 2010, Vienna has had a vice mayor and Executive City Councillor from the Green Party, Maria Vassilakou, who is also responsible for Urban Planning, Traffic & Transport, Climate Protection, Energy and Public Participation.
Energy transformation impossible without transforming the heat market
Mischensky has noticed a newly rising interest in solar thermal energy, particularly for district heating and not only at city, but also at national level. Like in most other European countries, energy companies have had to cope with falling wholesale prices for electricity. The price tumble calls into question the profitability of cogeneration plants, whose revenue mostly depends on electricity sales. The Federal Ministry of Science, Research and Economy has now commissioned the Austrian Institute of Technology (AIT) to investigate the technical and economical potential of solar heat in Austrian district heating networks. The results will be presented at a workshop organised by and held at the Vienna University of Technology on 3 December, together with a study on highly efficient cogeneration, district heating and district cooling. Mischensky adds: “The debate about energy transformation focuses too much on electricity. In fact, it will be impossible without transforming the heat market as well.”
New Austria Solar managing director to introduce “fresh ideas”
Mischensky became managing director of Austria Solar in August 2014. He says that he wants to make solar thermal energy a “cool and more emotional topic” and improve networking with other energy stakeholders and lobbyists for solar thermal. One instrument for accomplishing his goals is the Task Force Energiewende by the Austrian Climate and Energy Fund, which offers round-table discussions for all renewable energy stakeholders. “We meet on a regular basis to discuss policy recommendations,” Mischensky says. “It is important to be open-minded and be neither against other renewables, nor against fossil fuels,” he explains his position. “Companies engaged in the natural gas heating market often promote the combination of gas heating and solar thermal energy. I think this is a good way for transitioning to an entirely renewable-supported society.”
Before joining Austria Solar as managing director, Mischensky worked at the Austrian Climate and Energy Fund as manager of climate and energy model region Lieser-Maltatal, which has five municipalities. He was shareholder and manager of collector manufacturer Geo-Tec Solar Industries from 2006 to 2013 and of solar planning company IGS Intelligent Green Solutions. At present, he has no shares in any of those companies, Mischensky says. He discovered his interest in solar thermal when he was working at the Corporate Communications and Strategic Development Department of the municipal utility in Klagenfurt, Austria, and came in touch with projects for the solar heating of public pools and campsites more than 10 years back.
More information:
The Seven Energy Assumptions (in German): http://www.wien.gv.at/stadtentwicklung/energieplanung/pdf/energiethesen.pdf
Solar heating association Austria Solar: http://www.solarwaerme.at
Vienna Department for Energy Planning (MA 20): http://www.wien.gv.at/kontakte/ma20/index.html
Federal Ministry for Science, Research and Economy: http://www.bmwfw.gv.at
Green Energy Solutions: http://www.igs-europe.at
Energy model region Lieser-Maltatal: http://www.klimaundenergiemodellregionen.at/start.asp?ID=242147&b=5121
Stadtwerke Klagenfurt (municipal utility): http://www.stw.at
https://solarthermalworld.org/wp-content/uploads/2014/11/seven_energy_assumptions.pdf