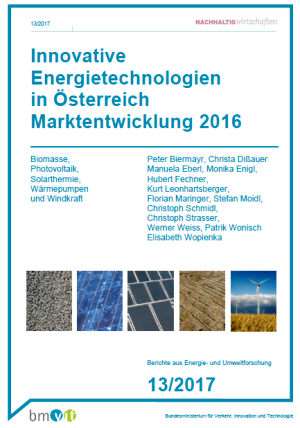 Last year, the Austrian solar thermal market declined for the seventh time in a row. The newly installed glazed collector area added up to 111,040 m² (78 MWth), 19 % below the one of 2015. Sales of biomass boilers experienced a similar drop, with wood chip boilers (<100 kW) down by 12 % and pellet boilers by 14 %. PV capacity was the only one growing again, rising to 156 MWp, 3 % above its 2015 total. These key figures have been taken from a report published annually by the Austrian Federal Ministry for Transport, Innovation and Technology, bmvit, and titled Innovative Energy Technologies in Austria – Market Development (see the attached document in German). This year’s 242-page document was first presented on 22 June in Vienna, Austria. The chapter starting on page 131 provides a comprehensive overview of the Austrian solar thermal market, including sales by collector type and application as well as export and import statistics.
Image: bmvit
Austria’s flat plate collector industry, which exported 83 % of its production in 2016 (535,438 m² or 375 MWth), remained a vital pillar of the market. The main exporter was – and still is – one of the world’s largest manufacturers of this kind of technology: Greenonetec based in St Veit in southern Austria. However, the number of imported units has plummeted from 64,170 m² in the peak year of 2009 to a mere 5,506 m².
Other types of collectors played only a minor role. A survey among manufacturers and sales businesses showed only 1,440 m² of vacuum tube, 130 m² of air and 760 m² of unglazed collectors for 2016. It also included two PV-thermal panel producers, which installed 587 m² of PVT elements in Austria, but exported 76 % of their production, primarily to Switzerland, Germany and Italy.
Diversifying the market
There are many reasons for the decline in demand. One factor is the rapidly reducing price of PV panels and the need of investors to use solar electricity, even for hot water preparation. The authors of the study also view heat pumps as competition and the low fossil fuel prices as a barrier to an increase in sales.
To diversify the product portfolio of the industry, the Austrian Energy and Climate Fund has subsidised large-scale solar thermal installations for eight years and the construction of solar houses for four. The latter require a minimum of 70 % of heat to be supplied by solar thermal. Continuing the schemes is an important step towards developing solutions and skills along the value chain and attract customers on these new markets.
However, the impact on sales has remained small. Over the last two years, 13 % of the newly installed collector area was used for non-residential purposes (see the pie chart below). The subsidy scheme on large-scale systems approved 25 applications totalling 7,058 m² in 2015, which might affect 2017 figures, as planning and construction takes one to two years. Last year saw the approval of 19 projects with a total of 16,500 m² of collector field area. Additionally, 13 solar houses with a combined area of 562 m² got the nod in 2016, after it had been 23 with 693 m² in 2015 (find more details about both programmes in the database of incentive programmes).

Newly installed collector area in 2016, by application
Source: bmvit report, p. 141
The turnover of Austria’s solar thermal industry in manufacturing, sales, planning and installation was around EUR 196 million in 2016, of which 49 % was generated domestically. The turnover of all renewable industries – solar, biomass, heat pumps and wind – was around EUR 4.7 billion, while the sector employed 31,000 people overall.
Websites of organisations mentioned in this article:
Sustainable development in bmvit’s own words: https://nachhaltigwirtschaften.at/en/
Federal incentive of Austrian Climate and Energy Fund: https://www.klimafonds.gv.at/home-en-US/
Greenonetec: http://www.greenonetec.com/en/
https://solarthermalworld.org/wp-content/uploads/2017/07/austria_marktentwicklung-2016.pdf