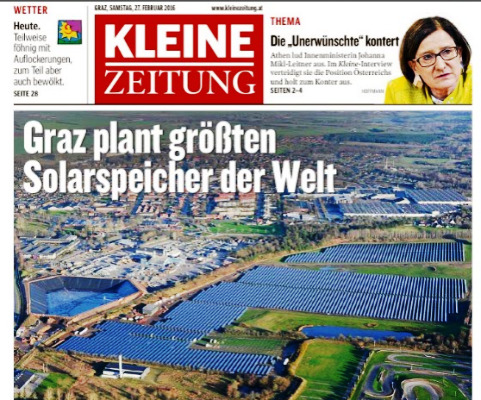 The Austrian municipality of Graz is preparing for the post-fossil fuel heating era: On 27 February, the front page of national newspaper Kleine Zeitung (copies sold each day: around 300,000) read “Graz plans largest solar storage worldwide”. According to the news article, regional energy provider Energie Steiermark and Austrian solar thermal system supplier S.O.L.I.D conducted a feasibility study for a huge solar district heating plant called Big Solar – with promising results. The study and the news article both references the world’s largest collector field in Danish Vojens with 70,000 m² (49 MWth) as a successful example of how to undertake such a large project. At the beginning of April, Energie Steiermark confirmed the plans for Big Solar’s realisation in a press release about 2015’s annual financial statement.
The decision of national utility Verbund to shut down the coal- and gas-fired combined heat and power plants in Mellach, south of the city centre, until 2020 has forced Energie Steiermark to begin an intensive search for alternatives. The CHP plants in Mellach currently produce most of the heat for the Graz’s district heating network. The recommended size of the planned solar heating system as proposed during a presentation by the Managing Director of S.O.L.I.D., Christian Holter, in December 2015, is indeed gigantic:
“Our simulations have shown that a collector field of this size, together with seasonal storage, can deliver heat all year round at a temperature of 85 °C and a heat price of 35 EUR/MWh, which is comparable to a gas-fired boiler system,” Holter explained in his presentation. His calculation is based on the following conditions:
Holter also pointed to the most convincing arguments in favour of the solar-based heating system: long-term price stability independent of fossil fuel prices and high supply security. “This is the big shift in district heating towards green energies,” the Speaker of the Management Board of Energie Steiermark, Christian Purrer, is quoted in the above-mentioned article. Plans are to install the solar field on meadows south of the city because ground-mounted systems are the most cost-effective, as the case studies from Denmark have shown.
Websites of institutions and companies mentioned in the article:
http://www.solid.at
http://www.e-steiermark.com