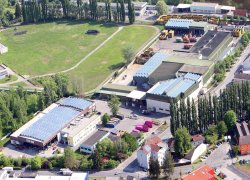 Graz, the capital of one of Austria’s federal states, Styria, and a city with a population of 276,000, is planning to increase the share of solar thermal in its district heating grid by 20 %. The regional utility Energie Steiermark and the Austrian turnkey provider S.O.L.I.D. agreed in June to carry out a feasibility study for a collector field of up to 500 MWth with a matching seasonal storage. The proof-of-concept study will be a joint project of regional energy providers, S.O.L.I.D. and outside specialists. The photo shows the four collector fields with a total of 7,400 m2 partially belonging to the AEVG, the municipal waste disposal company in Graz, operating since 2007, and to Energie Steiermark, operating since 2014.
Photo: S.O.L.I.D.

According to the S.O.L.I.D. paper Paradigm shift in district heating supply for European cities – 500,000 m2 of collector area for 20 % solar fraction in large city network of Graz, the concept study should investigate four main aspects:

The above-mentioned paper from two S.O.L.I.D. planners, Hannes Poier and Robert Söll, includes recommendations on the first design of such a huge solar district heating system:

Less respirable dust in the city
What is the reason for this strong push towards solar heat in Graz? Local utility Verbund announced in May 2014 that it would shut down the gas plants in Mellach south of the city until 2020 because electricity from gas-fired combined heat and power plants is often pushed out of the electricity market on the European Energy Exchange. This means that in six years, almost 80 % of today’s district heating energy will no longer be supplied by those plants.

In 2013, Graz’s district heating covered approximately 1,200 GWh of demand annually, which corresponds to 39 % of the city’s total heat demand. The district heating network should even be expanded to cover 46 % of heating demand by 2020 and 56 % by 2030. The main objective of the municipality administration is the reduction of the too high level of respirable dust in the city, caused by its unique geographical location as a city being surrounded by mountains at three sides. In 2030, around 80,000 households are expected to be connected to the district heating grid – around 60 % of all of the city’s households.

To develop options that can fill the supply gap left by the gas plants in Mellach in 2020/2030, the city senate established a project team lead by the Grazer Energy Agency last year with nine working groups. Several experts and stakeholders were invited to seek short- and long-term solutions to the future energy provision challenge of Graz’s district heating. Besides the 20 % increase in solar heat, the other district heating proposals were: