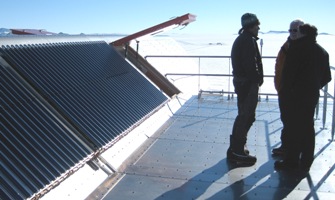 The Princess Elisabeth Station is the first and only polar research base operating entirely on renewable energies. The Belgian federal government commissioned the International Polar Foundation (IPF) to build this energy-efficient research institution in the Antarctic summer of 2007/2008. In February 2009, the station started its work on researching climate change at the South Pole.

The German system supplier and manufacturer of vacuum tube collectors, Consolar, was chosen to provide the station’s two solar heating systems. "We are very proud to support this pioneering polar station, which not only researches climate conditions, but also operates with our solar technology to show itself as a true model of environment-friendly work", Consolar’s head of marketing and sales, Andreas Siegemund, says. "This project shows that if it is possible to create an emission-free building in the extreme Antarctic climate, it will be possible to do that anywhere in the world." Freezing temperatures of more than 50 °C below zero, winds of up to 250 km per hour, complete darkness in winter times and entire days of sunshine in summer – these are the climatic and atmospheric conditions the solar thermal systems must withstand, in order to supply the 48-person team in the research station with the energy they need.

The second system with the Conus 502 heat accumulator and 12 TUBO 12 CPC tube collectors generates energy to heat the rooms in the station and is also used as a “snow melter”, melting snow in order to gain water for drinking and domestic use. Since the building has the highest energy efficiency class of a so called passive house and is only used in the summer season, its solar thermal system can actually cover the entire heating demand of the research station.

The solar thermal components were shipped to the Antarctic at the end of last year, a journey that took one and a half months. An IPF technical team, which Consolar had been briefed on the technology in Brussels, and installed them at the polar station thereafter.