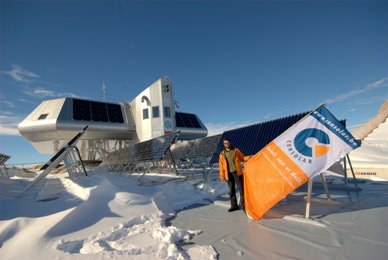 According to a press release by German manufacturer Consolar, the solar thermal system at the Antarctic polar station “Princess Elisabeth” is going to be expanded during the current research season 2010/2011. The station of the International Polar Foundation (IPF) started its work in February 2009 and is the first polar research base operating entirely on renewable energies (see http://www.solarthermalworld.org/node/605). Thomas Gillon (photo) from the Belgium office of Consolar put the two systems through their paces and could confirm their flawless operation even under extreme weather conditions.
Photo: International Polar Foundation

Over eight weeks, Gillon tested and monitored the solar systems that supply the 48-member research team at the first CO2-free polar station with heating, and hot and drinking water. Several times, they led him to impressive results. “Starting at four o’clock in the morning, it was possible to heat 1,500 litres of water from 45 to 85 °C within just three hours,” reports Gillon. “Even with an overcast sky, the vacuum tube collectors heated up to 98 °C. This shows that even diffuse sunlight is sufficient to warm up the collectors in such a strong manner. It meant we had a surplus of energy even without sunshine. ”

The second system also enjoys great popularity. With a heat accumulator and 12 vacuum tube collectors, the system is generating the energy to heat the rooms in the station. In addition, it is used as a “snow melter”, melting snow in order to provide water for drinking and washing. Gillon: “Immediately after its installation, the system supplied the station with 800 litres of water per day by melting the surrounding snow – despite the already declining, late summer sun.”

The research team at the Belgian polar station would not want to miss the solar heating systems some day. According to Consolar, there are even plans to expand the solar system to meet the station’s growing energy demand. And, a new mobile “snow melter” is thought to provide the team with fresh water during expeditions.

Consolar’s Head of Marketing and Sales, Andreas Siegemund, adds: “This project shows that if it is possible to create an emission-free building in the extreme Antarctic climate, it will be possible to do that anywhere else in the world.” According to Siegemund, the Antarctic experiences wind speeds of up to 250 km/h and temperatures down to -50 ° C – tough conditions whose impact on the solar systems is difficult to predict. “Among other things, it is very important that our collector tubes are not framed at the lower side, so that snow – and particularly condensate – can run down the collector without risking frost.”

The entire solar system is controlled by a monitoring system. Long-term operating results have not been available yet.