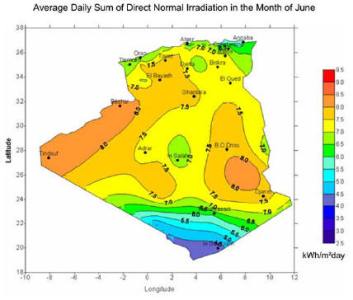 Algeria has one of the greatest solar potentials in the world. The annual radiation ranges from 1,700 kWh/m2 in the North to 2,260 kWh in the South. The solar water heater market, however, is still in a deep slumber. Waking it up is the responsibility of a new subsidy programme.
Source: http://www.sunconsult.dz

The ALSOL solar water heater programme is supposed to start in June this year. “By then we will have started with the selection of eligible suppliers,” the head of the Department for Transfer and Renewable Energies at APRUE (National Agency for Promotion and Rationalisation of Renewable Energy Use). A total of 400 residential systems is planned to be subsidised within one year.

The financial support that the National Fund for Energy Management (FNME) will provide is thought to ensure the success of this programme, financing up to 45% of the overall costs of an installed residential solar water heater. The rest will be financed by partner banks with a subsidised credit rate granted to each customer.

The ALSOL Programme is going to be a first step in waking up the solar water heater market in Algeria. So far, there have been no local manufacturers. Equipment is imported from other countries, such as Tunisia, Turkey, China and Spain. According to APRUE, a solar water heater with 200 litres costs around Algerian Dinar (DZD) 100,000 (EUR 1,124). “This is, by far, too expensive for an average family income,” the head of the responsible department at APRUE said. The market volume is estimated at around 50 residential systems per year. Additionally, APRUE financed a total of 24 200-litre-systems for schools throughout the entire country, in order to demonstrate the use of solar energy within the education sector.

But there are also a few larger demonstration plants, for example, the best practise examples by the Algerian Ministry of Mines. One is the Technical School in Blida, which needed hot water supply for the school’s refectory. A total collector area of 18.8 m2 was installed, resulting in an annual solar contribution of 11,000 kWh (585 kWh/m2a). The second example concerns the Ben Aknoun training centre in the city of Algiers, which was equipped with a 16 m2 collector area. An annual solar contribution of over 9,000 kWh (563 kWh/m2a) could be counted.

APRUE is optimistic that there will be a follow-up programme once the 400 Alsol systems have been installed, because a market development programme financed by the Global Environment Facility (GEF) is about to start as well. Its four-year programme is hoped to facilitate the installation of another 70,000 m2, of which 53% are to be residential and 47% collective systems. Recent discussions have focused on a financial mechanism of 45% subsidies by FNME, 10% contribution by the client and 45% financed by a low-interest loan.

The text was written in cooperation with communication specialist Hanna Schober, based in South Africa. Schober@solrico.com