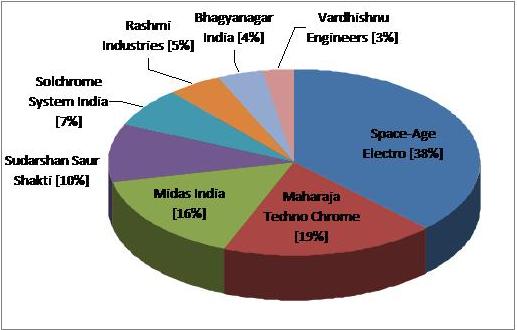 India’s coating industry has shown impressive growth rates over the last ten years. Just one manufacturer of selective coating dominated the industry a decade ago: Solchrome, who had obtained the technology from Canada. Today, 8 manufacturers are using the Nalsun technology developed by the NAL.
Source: own research

Almost 93 % of today’s coating for flat plate collector manufacturing in India is relying on the Nalsun technology developed by the National Aerospace Laboratory (NAL) in Bangalore in 1988. It uses a black chromium nano-thin coating and conforms to BIS 12933 with an emittance < 20 % and an absorptance > 95 %. The big advantages of this coating technology are the low investment and operating costs. As it is a black chromium bath with room temperature, Nalsun allows, besides the lower power costs, also considerable savings in terms of cooling costs. The absence of a nickel undercoat reduces the number of processing steps further, thereby contributing to lower operation costs. A machine with a coating capacity of 5,000 m2 requires an investment of only US$ 20,000.

Until April 2009, the technology was made accessible to 26 entrepreneurs. Eight of the solar coating manufacturers have already used it successfully – among them the three biggest ones, SpaceAge, Maharaja Techno Chrome and Midas India (see table below). The coating manufacturers questioned produced a total of 319,261 m2 throughout the Indian fiscal year from April 2008 to March 2009. They are fairly optimistic about the future development and want to increase their production output this fiscal year, by, on average, 55 % until April 2010. These findings are the conclusions of a market survey carried out by the solarthermalworld.org correspondent Jaideep Malaviya, who is based in Pune, India.