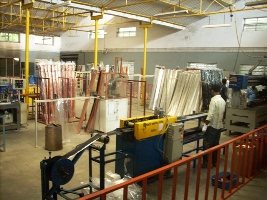 Back in 2007, Space Age Electro Technology India Pvt. Ltd. (SET), was the only Indian manufacturer running a selective black chrome coating line based on the NALSUN technology developed in India and it was the only one at that time to offer ultrasonic welded absorbers.

The manufacturer was also the first to use laser welding technology for absorber fins in 2005. It produced around 100,000 m2 annually within the last two years and plans to increase its output to 160,000 m2 this year (see the following table).

Already looking ahead, Space Age Electro wants, again, to be the first company to coat full plate aluminium sheets – now that they are available in India. The company’s future goals concerns already available patents on PVD magnetron sputtering for aluminium and copper components: products resulting from these innovations could be offered to either flat plate collector or parabolic trough manufacturers.

The company history in detail:

Space Age Electro Technology was founded in 1993 by Sunanda Jayaramu. The company’s present manager is her husband Mayyapa Jayaramu. Initially, SET started coating 120 mm wide sheets from the coil, since full plate coils or sheets had not been available in India at that time. It used batch coating and soldered the fin to the pipe, but the process suffered from the differing optical variances of the fins. As if that were not enough, the dip technology for the black chrome coating was raising environmental issues, too.

It was in 2005 when the company invested in new equipment a second time, in order to keep up with continued innovations. It bought a laser welding machine from Germany for € 0.65 million and started producing laser-welded copper fins with a width of 115 mm and a thickness of 0.12 mm. The company’s manufacturing facility is able to produce nearly 1,200 m2/day, although, presently, it is operating at half its capacity. According to the company´s own information, this machinery is the only one of its kind in India right now.